I TURNED MY HOUSE INTO A GYM AND LOST 10 STONE

WHEN BUSY MUM-OF-THREE GEMMA HOWDEN, 28, FROM LAMPETER, WALES, COULDN’T FIND THE TIME FOR A GYM WORKOUT, SHE TRANSFORMED HER HOME INTO HER VERY OWN FITNESS BOOT CAMP – AND LOST MORE THAN 10ST…

I could barely find time to steal a glimpse of my reflection in the mirror, let alone fit a workout into my hectic schedule. But when I did manage to catch sight of myself, I recoiled in horror. 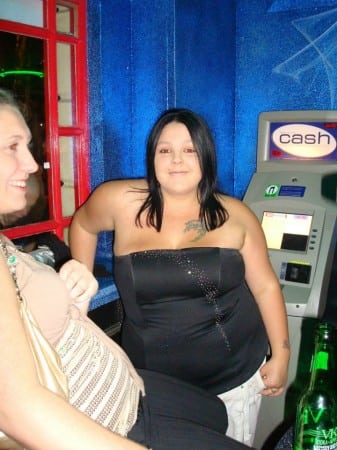 Tipping the scales at 19st and bursting out of a size 28, I could no longer recognise the woman staring back at me. ‘I’m huge,’ I moaned to my partner, plumber, John Shore, 33, as I pulled at my spare tyre. My dress size didn’t matter to him, but there was no denying it, I desperately needed to do something about my expanding waistline.

With school runs, the cooking and housework to do, there just wasn’t enough time in the day for me to squeeze in an exercise session. Unable to afford an expensive gym membership, I decided there was only one thing for it – if I couldn’t get to the gym, I would bring the gym to me. To tackle my flabby figure head on, I transformed my house into a fitness boot camp.

I improvised, using whatever I could get my hands on as equipment. Tins of beans from my kitchen cupboard became weights and I would dance around with them to music channels on the television. My hallway stretched from the front of the house to the back door. It was soon my running track and I would sprint along it like Jessica Ennis.

I would hurdle over the stair gate before dashing up and down the stairs 20 times in a row. I began doing 20 star jumps a day but built up to 100 as my fitness levels improved and the flab fell off. If I was watching television I would do 15 sit ups at a time during the ad break. It was the answer to all my problems as I could still look after Summer, six, Coley, four, and Vinnie, two, and do all the chores I needed to.

I realised something had change when I flicked through the family album and noticed that there were no pictures of me with my children. I’d been avoiding the camera at all costs due to my unsightly frumpy figure. I had been in denial about my size and never realised I had got so big, unfit and unhealthy. In my mind I thought I looked like a size 10.

I had always been on the larger side and when I was younger I struggled to squeeze into my size 16 school uniform. But it was when I fell pregnant that I really started piling on the pounds, as I made the most of eating for two. When it came to losing the post-baby weight, I tried every diet in the book. I would manage to shift a couple of stone and then gain it all again. Nothing seemed to work for me. But my bubbly personality used to overshadow any niggles I had about my weight.

I was known as the loud and outgoing one of the group and I learnt to push any worries about my size to the back of my mind. Not only did I want my little ones to have pictures with their mum to look back on, but I wanted to play an active role in their lives too. I didn’t want to be collapsing in a heap huffing and puffing while trying to keep up with my kids or watching them from the side-lines. I knew I needed to change her body not just for me, but for my family too. But I hated the thought of eyes glued to me as I worked up a sweat at the gym.

The thought of slim and sexy girls and buff lads staring at my wobbly bits as I pounded the treadmill or made a fool of myself on the rowing machine left me mortified. I gave it a go a few times and tried to commit to it but it just wasn’t for me. The giant mirrors positioned on the walls in front of me while I was working out left me feeling even more self-conscious. And I needed to be at home to look after the children, so exercising at home made perfect sense. No one was watching me become a sweaty mess and it meant I could be flexible and fit in a session after putting them to bed.

I would grab any moment I could to cram in a bit of exercise – between putting food on the table, hoovering the living room and kissing the kids goodnight, I would leap around the house in my jogging bottoms armed with a can of custard in each hand. As well as embarking on a new fitness regime, I vowed to ditch the junk food. I swapped my beloved greasy takeaways, bags of crisps and bars of chocolate for salad, fruit and veg.

Before I could easily scoff eight Mars bars a day without thinking of calories and I would often pick up a takeaway to eat on the way home before gorging on a fry-up as a second dinner. But after breaking my bad habits, I soon started to see results as the pounds slipped away. In my first week alone she lost an amazing 9lbs and it gave me the motivation I needed to keep going. I dropped a dress size in my first month and people were starting to notice that I was shrinking.

My little girl asked me: ‘Mummy, where has your fat bum gone?’ It was the best thing I’d heard in a long time – it was the reason I was doing it in the first place: for my children. The compliments were enough to keep me on the right track. And now two years down the line and thanks to my ‘stay-at-home mummy diet’, I weigh a healthy 8st 13lbs and can slip into a slender size 8 with ease.

I’ve thrown out my tent-sized t-shirts and swapped them for tight-fitting dresses. I love being able to walk into a high street shop and be confident that I can choose fashionable clothes straight off the peg, instead of resorting to plus-size catalogues.

When I tell people I lost 10 stone after turning my house into a boot camp they don’t believe it. It sounds a little crazy, but it worked and it’s absolutely true.