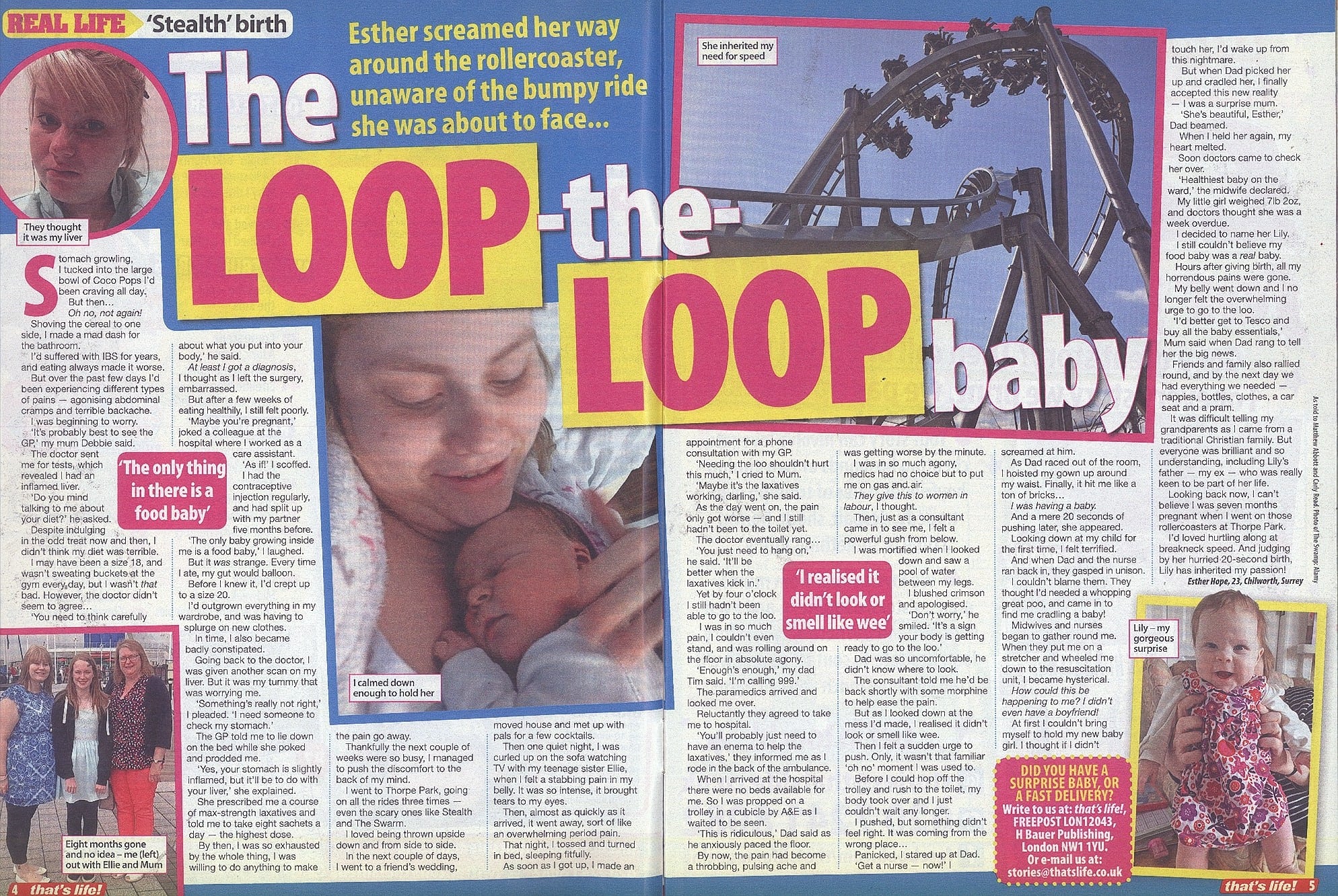 SellUsYourStory.com help hundreds of people every month tell and sell their stories with the national press.  This month Esther told how she had a surprise pregnancy after thinking she needed the loo! We helped Esther secure an exclusive magazine deal for the maximum payment possible.

As the largest independent press agency in the country, we guarantee to secure you the most money for your story.  More importantly, you’ll maintain full control. We’ll ensure that YOUR story is told YOUR way. If you have a surprise pregnancy story, or any other real life story, get in touch today.

Esther, 23, Surrey, spent most of the day running to and from the toilet. Craving cereal and experiencing mystery stomach cramps, she was determined to flush away her worries somehow…

As I tucked into a massive bowl of Coco-Pops, I felt a familiar and unwelcome gurgling in my gut. “Uh-oh,” I thought. “Not again.”

I ditched the bowl of cereal – I don’t know why I’d started craving it all of a sudden – and ran as fast as I could to the loo. It wasn’t unusual for me to have tummy problems. I’d been suffering with IBS for a while. Coupled with bouts of anxiety and stress I always felt worse after I’d eaten. 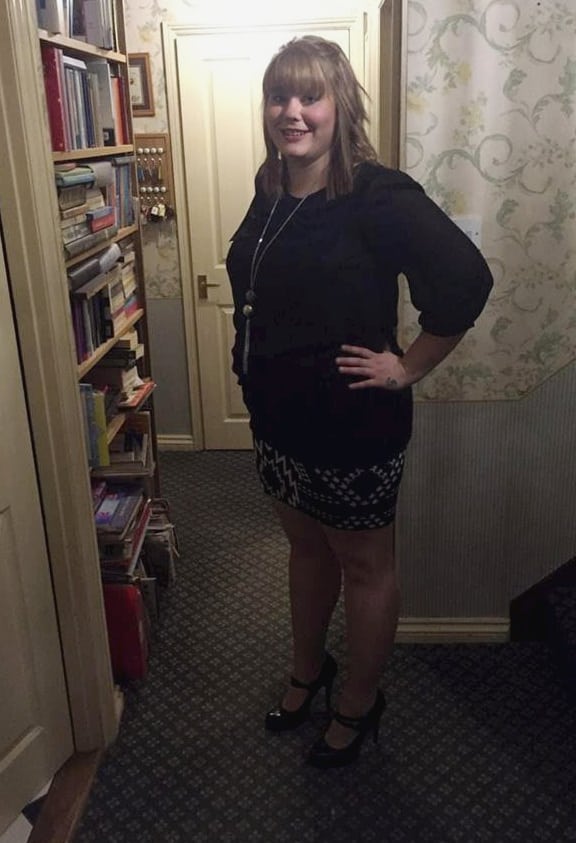 Esther when she was seven months pregnant before a girls night out.

But the last few days I’d started getting different kinds of stomach pains, abdominal cramps and back ache, and I was starting to worry. “I don’t think it’s anything to be concerned about,” my mum, Debbie, 53, said. “But it’s probably best to see the doctor anyway.”

The doctor didn’t seem that concerned either. He sent me to have my liver looked at and called me in when the results came back.

“You have an inflamed liver, Ms Hope,” he said. “Do you mind talking to me about your diet?”

I’m not a small girl, but my diet wasn’t that bad. I have the odd treat now and then, and I’m not in the gym five times a week, but I didn’t think I ate unhealthily. But after sheepishly telling him my daily eating habits, he said I needed to think more carefully about what I was putting in my body.

I came away feeling embarrassed and foolish, but at least with a diagnosis. I could eat better, and therefore get better. All I had to do was be more conscious of what I ate. But after a few weeks of trying to eat healthy, I still felt poorly.

“Maybe you’re pregnant,” joked a colleague at the hospital where I worked as a health care assistant. I laughed it off. “As if!” I said. I’d had the contraceptive injection and hadn’t had a period in months. And I’d split up with my partner the year before, so as far as I was concerned there was no chance.

But there was a baby of sorts. A food baby.

I felt like every time I ate something my tummy ballooned. I’d run to and from the loo every hour, and even lying down became uncomfortable. I put on two stone and jumped from a size 18 to a size 20. I was constantly buying new clothes because I was outgrowing everything.

I went back to the doctor who arranged for me to have another ultrasound on my liver. But before the appointment, I decided to get a second opinion. I just didn’t trust the advice I was getting. I was concerned that nobody had once felt my abdomen for irregularities. By that point, I had become severely constipated, so when I saw the GP they were more interested in giving me laxatives that checking anything else.

“Something’s really not right,” I said. “I need someone to check my stomach. It can’t just be that I’m constipated.”

The GP had me lie down on the bed and she pressed and prodded me. 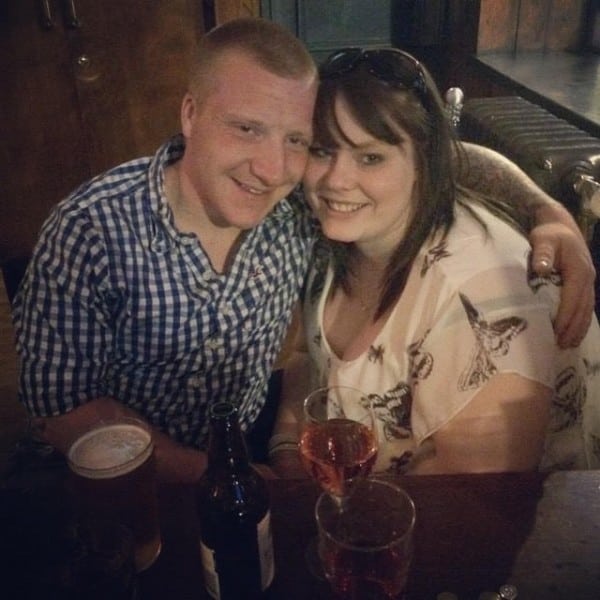 Esther four months pregnant with the father of baby, Ben, 25.

“Yes, your stomach is slightly inflamed,” she said. “It must be to do with your liver and needing to go to the loo.” She prescribed me a course of max-strength laxatives and told me to take eight sachets a day – the maximum dose. By that point I was so lethargic and tired, I was willing to do anything to make the pain and discomfort go away.

I decided to try my best to put it to the back of my mind. The next couple of weeks were busy. I went to the wedding of a family friend and even went on some rides at Thorpe Park with my sister and one of her friends.

Letting my hair down, having a few drinks and having some fun on the roller-coasters actually helped me forget about my sickness and symptoms.

A week later we moved home and I help mum and dad lug big boxes and furniture to our new house. Then one night, sitting on the sofa in our new home, watching TV with my sister, Ellie, 15, I felt a sharp stabbing pain in my tummy.

“Ow,” I winced, doubling over. “What was that?!” It was overwhelming, intense and powerful. Then almost as quickly as it arrived, it went away. It felt like a period pain. I couldn’t be having a period, could I? I thought to myself. I was on the injection.

That night I slept fitfully, on and off, waking up every half hour with the same stabbing pain in my stomach. As soon as I got up I called the doctor and made a phone appointment.

“Wanting to go to the loo shouldn’t hurt this much,” I said to mum. “Maybe it’s the laxatives working, darling,” she said. Still… I thought.

As the day went on the pain only got worse, and more frequent. And I still hadn’t been to the toilet. The doctor who called me said the same thing I’d heard a thousand times. “You’re constipated. You just need to hang on. The pain is the laxatives kicking in.”

But by four o’clock that afternoon, after still not being able to go to the loo, I could barely stand. I was rolling around on the floor in absolute agony. 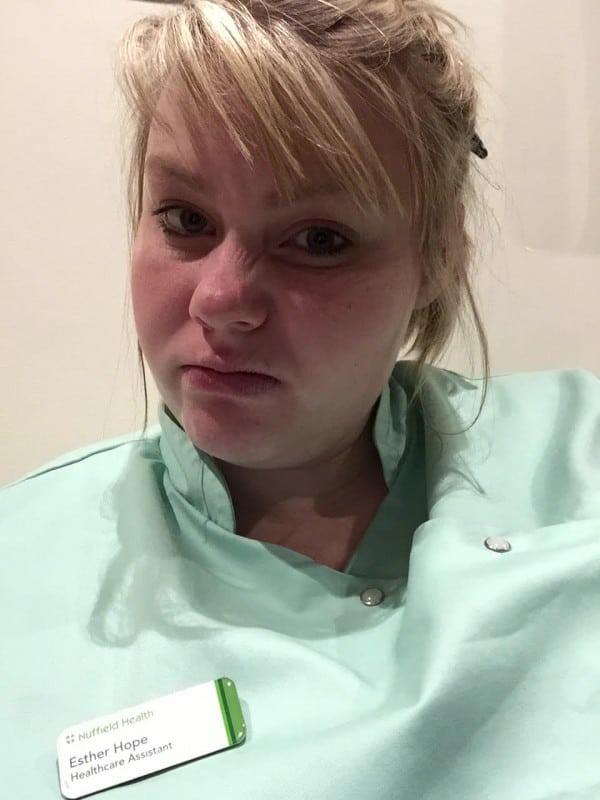 When the paramedics arrived at our house in Chilworth, Surrey, they took one look at me and reluctantly agreed that to take me to the Royal Surrey County Hospital in Guildford.

“You probably just need an emergency enema to help the laxatives, but we’ll take you anyway,” they said.

At the hospital there were no beds available, so they left me and dad in a cubicle off the A&E department. I was sat on a trolley waiting to be seen.

“This is ridiculous,” dad said, as he paced the floor anxiously.

The pain had become a pulsing, throbbing ache by now, and seemed to be getting sharper and more powerful as each minute passed. I was in so much pain that they had to give me gas and air. I remember thinking that they only give this to women in labour!

A consultant came in to see me after we’d been waiting for a while. While he was checking me over, I just felt a gush from below.

I looked down and saw a pool of water on the floor between my legs. I blushed crimson and apologised. I was mortified. “Don’t worry,” the consultant said. “It’s a sign your body is getting ready to go to the loo.” I looked at dad who was obviously really uncomfortable, and concerned. He didn’t know where to look.

The consultant told me not to worry, that he’d be back shortly with some morphine for the pain. But it didn’t look or smell like wee to me.

A couple of minutes after he’d left, I felt a sudden urge to push. It wasn’t that familiar ‘oh no’ moment I was used to, but I knew I had to get to the loo, and fast. But before I could hop down off the trolley, my body took over, and I just couldn’t wait any longer. But when I pushed, something didn’t feel right. It was coming from the wrong place.

I put my hands between my legs and… 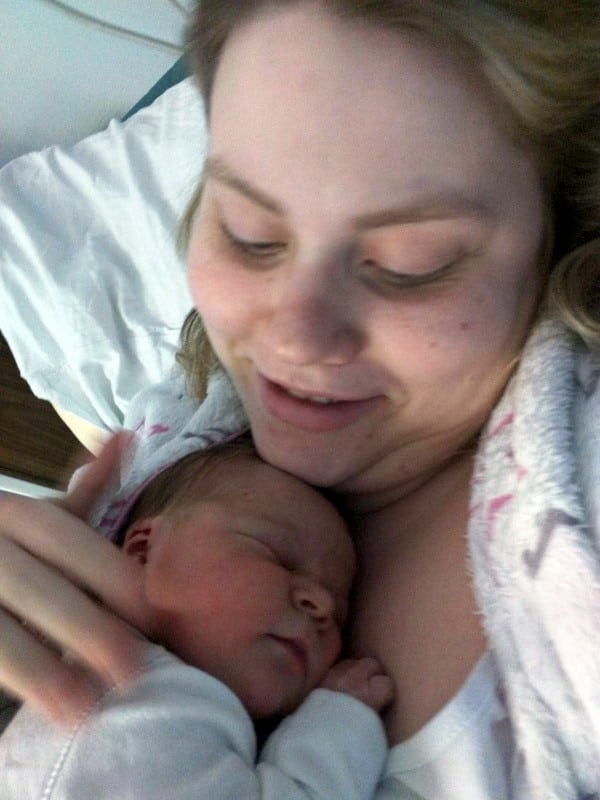 Esther with her daughter Lily.

Oh god, what was that? A head?

I was terrified. I looked up at my dad – panic and horror filling me with dread. “Get a nurse,” I screamed. “Now!”

Dad raced out of the room and I pulled my gown up around my waist and the full realisation of what was actually happening hit me like a ton of bricks. I was having a baby!

Within seconds of pushing she came out, purple and grey and covered in a white paste; the umbilical cord still attached to me. When dad and the nurse came back in there was an audible gasp.

Dad left the cubicle thinking I needed a big poo, he came back in to see me cradling a baby. I looked down and realised it was a girl. I couldn’t believe she was mine. I didn’t know what to do. I was absolutely hysterical.

Suddenly I was surrounded by midwives and nurses. They put me on a stretcher and wheeled me down to the resus unit where they tried to calm me down. I was pieces.

At first I couldn’t bring myself to hold her. I thought if I don’t hold her, maybe it’s not real, and I’ll wake up. So dad picked her up and held her first. Seeing him holding her calmed me down.

“Dad…” I said reaching out to touch her. Dad smiled at me and said: “She’s beautiful, Esther.” And she was. She was perfect too. The doctors fully checked her over and despite a bit of flaky skin, she was healthy. “Healthiest baby on the ward,” one of the midwives said. 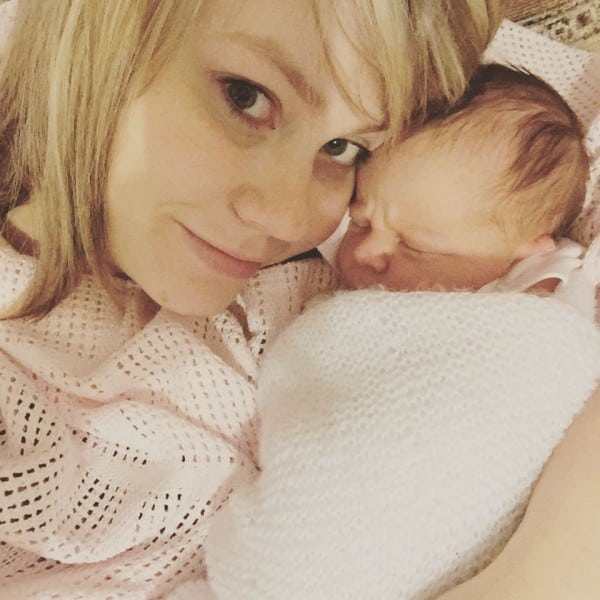 Esther now with her daughter Lily.

When I finally held her my heart melted. She was one week over due and weighed 7lbs 2oz.

I can’t believe what I thought was a food baby was actually a real baby, named Lily. Within hours of giving birth all my pains and aches went away. My belly went down and my urge to go to the loo dissipated.

When she heard the news, mum raced to Tesco to pick up the essentials: nappies, bottles, clothes etc. And friends and family rallied around. By the next day we had everything we needed – including a car seat and pram.

People have been wonderful to us. I come from a traditional Christian family, so it was a real shock and difficult to tell my grandparents, but everyone has been brilliant and understanding.

My surprise pregnancy has been the best surprise ever. And I couldn’t imagine life without her.

We helped Esther sell her story exclusively to That’s Life Magazine, who outbid rival magazines for the rights to print Esther’s story.  If you would like us to auction your story to the highest bidding magazine, get in touch using the story valuation form on this page.

For more information you can read our Sell My Story page, which explains the process of selling your story in more detail, or you can contact us here. Remember, we’ll consider any story as long as it’s true – we don’t only sell surprise pregnancy stories! 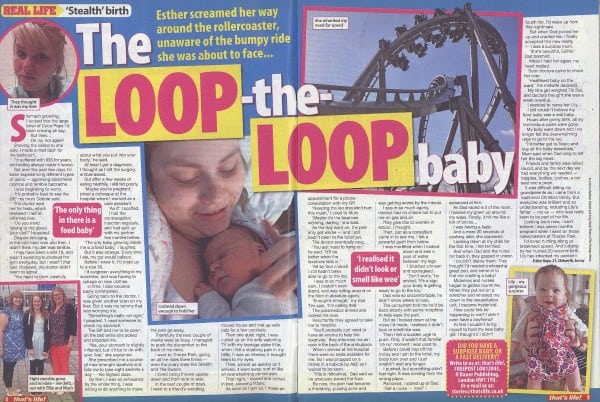