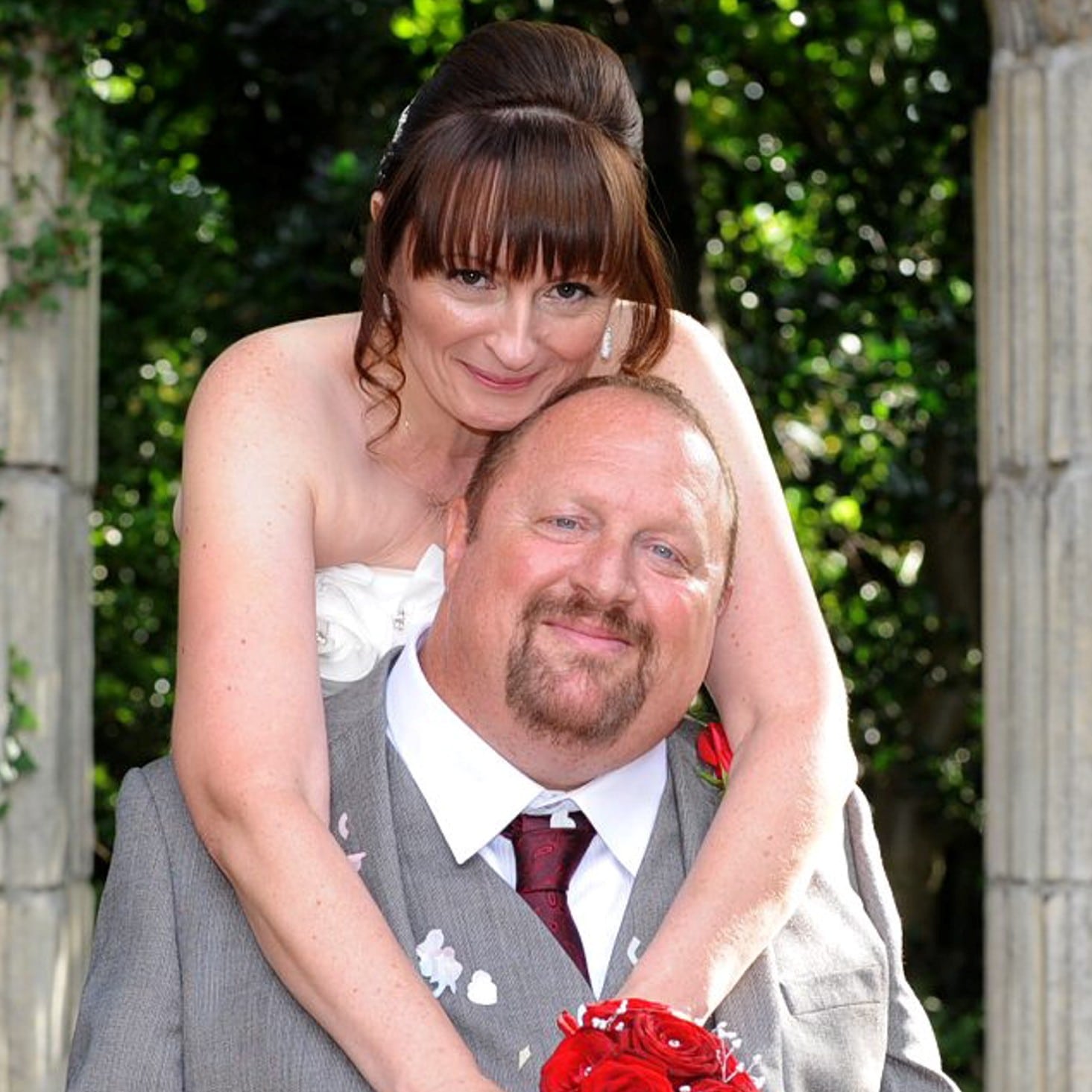 I MARRIED MY CARER:   FRANCO, 45, FEARED HE WOULD NEVER FIND LOVE WHEN HE BROKE HIS NECK IN A FREAK RUGBY ACCIDENT WHICH LEFT HIM PARALYSED.

AFTER GETTING TRAPPED UNDER A PILE OF PLAYERS FITNESS FANATIC FRANCO WAS LEFT WITH LIMITED MOBILITY AND NO MOVEMENT IN HIS LEGS. HE WAS LEFT DEVASTATED, FACING UP TO A LONELY LIFE AT HOME UNDER HIS PARENTS WATCH – UNTIL PRETTY THERESA WAS SENT TO LOOK AFTER HIM – AND IT WAS LOVE AT FIRST SIGHT.

THERESA CARED FOR HIM FOR THREE YEARS – HELPING HIM WASH, DRESS AND EAT BEFORE FRANCO FINALLY PLUCKED UP THE COURAGE TO ASK HER ON A DATE. AS ROMANCE BLOSSOMED THERESA QUIT HER JOB TO BE WITH FRANCO AND AFTER SEVEN HAPPY YEARS TOGETHER THEY HAVE FINALLY TIED THE KNOT. 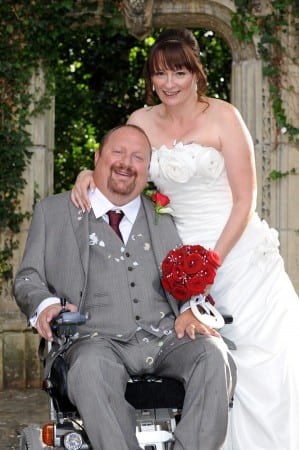 The life-changing injury that threatened to blight Franco forever turned out to be the best thing that ever happened to him… and his partner Theresa. A freak rugby accident left Franco completely paralysed from the waist down and almost totally paralysed from below the shoulders. Leaving the former fitness fanatic bound to a wheel chair and needing full time care.

His support was provided by Theresa – who was working in the care office in an Administration role when she was sent to help Franco when nobody else was available – and she has no regrets about taking a break from her day job. It was love at first sight for the two, who are now looking to spend their first Christmas together as newly weds.

Theresa said: “When I look at Franco, I don’t see a man in a wheelchair. “I see a man who is caring, loving and full of life.” Before his accident Franco led an active life – earning a living as a carpenter and spending his evenings in the gym or training for and playing rugby. He said: “When I was a teenager I would eat, sleep and breathe rugby. It was all I wanted to do. “I set my sights on playing the sport professionally and everything I did was leading up to that.” But in one game – Franco’s dream was dashed forever. 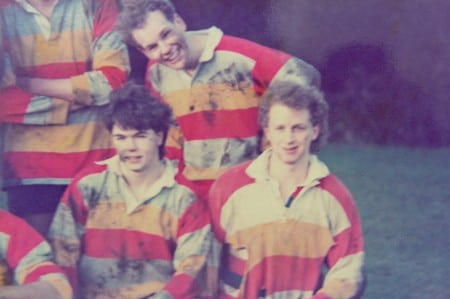 Whilst playing for his local club he raced across the pitch to get to the ball when several players bounded on top of him. He said: “I hit the floor and in that moment it felt like I was viewing the world in slow motion. “The adrenalin masked the pain – but I had a sinking feeling something really bad had happened to me because of the crowd’s reaction..   I had no idea then just how serious it was.”

Franco was stretchered off the pitch and rushed to hospital. He didn’t leave for six months – three of which he lay, unable to move, in intensive care. Franco said: “I thought I was recovering slowly and one day I plucked up the courage to ask a nurse: ‘How long do you think it will be till I’m better? She looked at me solemnly and replied: “You won’t get better. You’ll never walk again.”‘

A few days after the devastating news was broken to Franco, he woke up to find a wheelchair had been pushed into his hospital room. He said: “I remember thinking, ‘that can’t possibly be for me’. I told them that there was no way I was spending the rest of my life in that. But I had no choice.”

Over time Franco had to face up to his new life in the wheelchair and the realisation that he would need full time care for the rest of his life. His Mum volunteered to provide him with the support he needed, but when she developed Parkinsons she needed looking after herself, and the two of them applied for a private carer to visit their house. But when the stranger arrived Franco struggled to get on with her and called the company to ask if they would send someone else.

The phone buzzed loudly in the office where care-planner Theresa was busy with her paper work. “I remember that day so well,” she said. “We were franticly busy.

The chap on the phone asked if we could send another carer but we didn’t have anybody available at such short notice. With noone else free I jumped at the chance to leave my desk for a few hours. I thought it would be a nice break from sitting at the computer, so off I popped.” 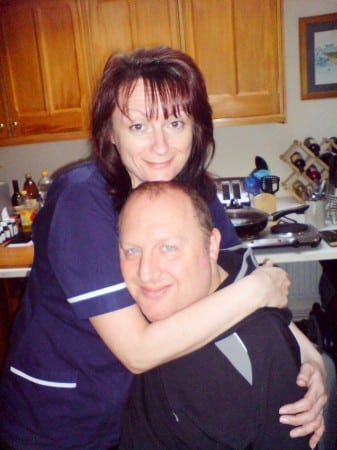 When she reached the house and a smiling Franco opened the door – Theresa felt sure that there was no returning to her normal day job. She said: “After just one day with Franco I returned and told my boss: ‘ I don’t want to do Admin. work anymore, I want to look after that case. “Franco and I just immediately clicked.

My boss wasn’t too happy that I wanted to change my role in the company – but I was so determined. I had an overwhelming feeling I was doing the right thing.”

From that day on Theresa became Franco’s full time carer – and returned to the house every day to help him eat, wash and dress. Franco said: “Initially I felt really guilty for making this poor woman come round to the house out of the blue. But as soon as Theresa got here it was like it was meant to be. We hit it off straight away and chatted like were old friends. It was just good to have someone to have a laugh with. We would go for walks and listen to music together. The hours flew by when she was here.”

The fun times spent at Franco’s house came to mean alot to Theresa who was going through a difficult time in her personal life. She said: “I was going through a divorce and on top of that I lost my dad, and my sister lost her partner around the same time. Franco was a great friend to me when I needed him. At his house we never stopped chatting. Then back at home I would gush about how wonderful he was.”

Despite having no clue how Theresa felt Franco decided to hedge his bets and planed to ask her on a date. He said: “I thought I’d give it a shot. I never in a million years thought she’d say yes. I was just some guy in a wheelchair. What would she see in me?”

But he didn’t know that Theresa was feeling exactly the same way and when Franco asked her on a date she immediately said yes. The two of them had a night away from the house and went to view an Eagles tribute band. Theresa said: “I felt something was developing between us but I wasn’t sure what.” She had growing concerns about how their blossoming relationship would effect her job so she made a drastic decision.

“I knew it wasn’t right to continue working there as there were obvious boundaries it would be wrong to cross so I quit my job to be with Franco,” Theresa said. Without any constraints things began to move fast for the couple who brought a house in 2011 and the following year Franco proposed. He picked the day carefully – a family barbecue to celebrate his Mother’s, sister-in-law’s and Theresa’s birthday – which were all on the same day. Theresa said: “When he asked me I stood there for about 20 seconds without saying anything at all.

“I was in shock. Then my sister leaned and said – ‘well, aren’t you going to answer him? And I suddenly exclaimed,’Yes! Of course.'”

Romantic Franco took charge of planning their wedding. He said: “I wanted to make it the best day possible for Theresa. She has made me the happiest man in the world. I can’t believe how my life has turned around. It means I don’t regret playing rugby or the accident. Things have actually panned out better for me than I ever could have hoped. It sounds corny but through the accident I have met some of the nicest people, made a huge amount of friends and seen acts of kindness I didn’t think existed. And I have met my beautiful wife, and all without the accident wouldn’t have been possible.”

If you would like to know more about spinal injuries, you can find information at Spinal Research website: http://www.spinal-research.org/

If you have a story similar to ‘I Married my Carer’ or you have any other interesting real-life story, please get in touch.  As the UK’s largest and most trusted press agency, we guarantee to pay you the most for your story.  Simply tell us a little bit about your story using the form on the right hand side of the page.  We’ll get back to you straight away.