Magic was definitely in the air for this bride and groom who tied the knot in the ultimate extravagant themed Harry Potter Wedding!

SellUsYourStory.com were contacted by newlyweds Cassie and Lewis Byrom, who thought their unique Harry Potter wedding might make a good magazine article.  They were right.  SellUsYourStory.com is part of the largest press agency in the UK and we specialise in helping people share their stories and get the most money possible for their story.

Cassie and Lewis Byrom have always loved the JK Rowling books and got engaged in Diagon Alley.

Lewis surprised Cassie with the trip with a letter ‘accepting her into The Hogwarts School of Witchcraft and Wizadry’ for her 30th birthday.

Inside the envelope were two tickets to Harry Potter World at Universal Studios in Orlando, Florida, where Lewis got down on one knee.

The book-mad pair then spent a year creating a truly magical wedding, transforming the grand Midland Hotel in Manchester into their very own Great Hall for a spellbinding reception.

They handmade 130 wands for each of their guests who received invites welcoming them to witness the making of the ‘unbreakable vow’.

Their cake was topped with Lego figurines of Lord Voldemort and Bellatrix Lestrange, Cassie’s favourite character, and the seating plan was arranged by the Sorting Hat.

Each place setting had a Golden Snitch – made from Ferrero Rochers with wings – and each table had a centre piece made from potions books, spells and horcruxes. 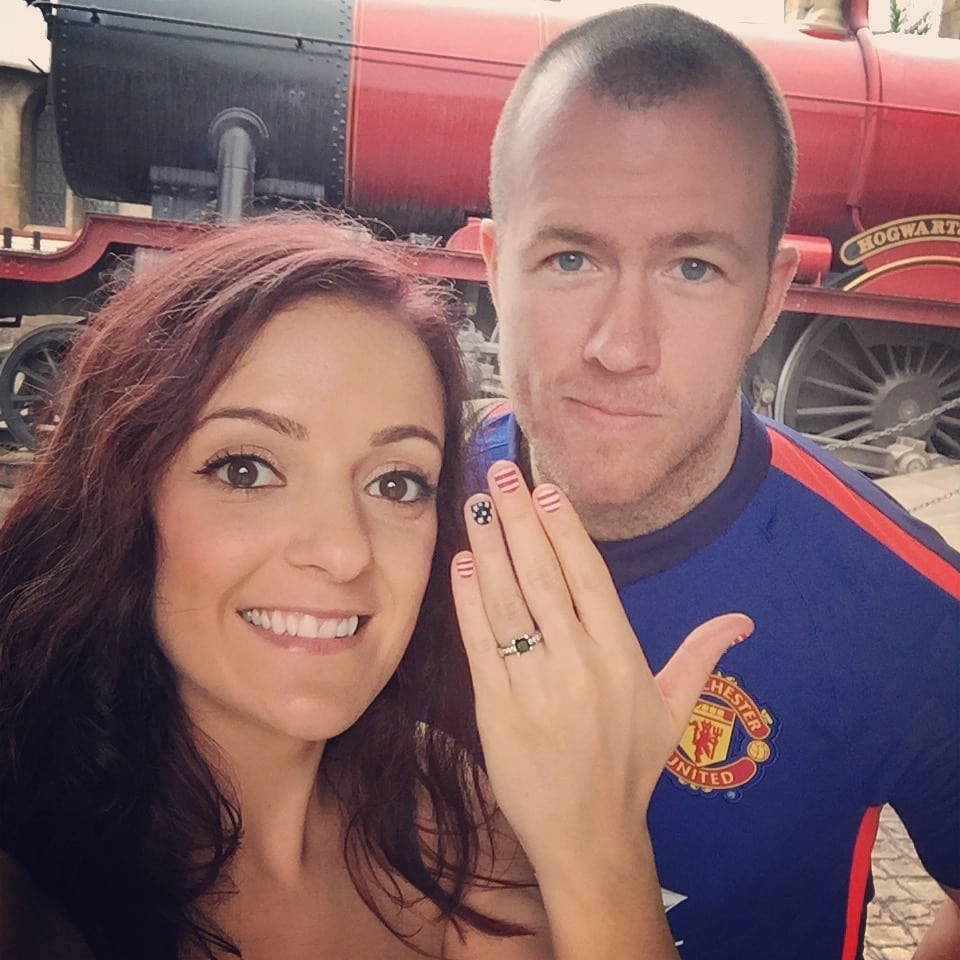 Wanted posters from the Ministry of Magic were put up around the hall with the faces of the bride and groom and their guests.

And the couple had 11 tables – named after the novels and the school houses of Gryffendor, Slytherin, HufflePuff and Ravenclaw – with the top table displaying the crests. 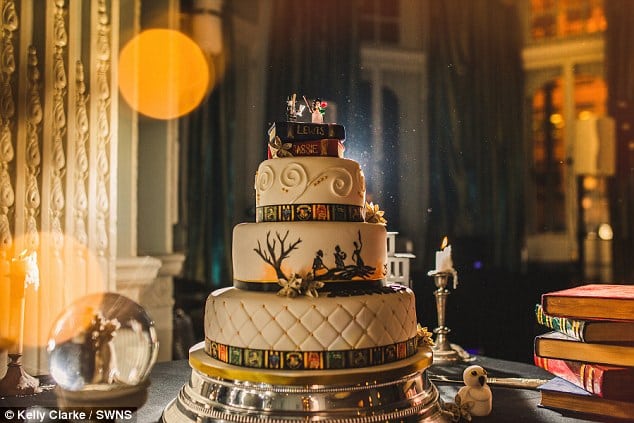 Bride Cassie, 31, wore a red garter decorated with the Hogwarts coat of arms, while her and her bridesmaids carried paper bouquets made from more than 20 cut-up novels.

Finance worker Cassie, from Stockport, said: “Planning the wedding was a full-time job, but it was worth every penny and minute we spent.

“We sifted through car boots, discount stores and second-hand shops every weekend for three months looking for Harry Potter paraphernalia. 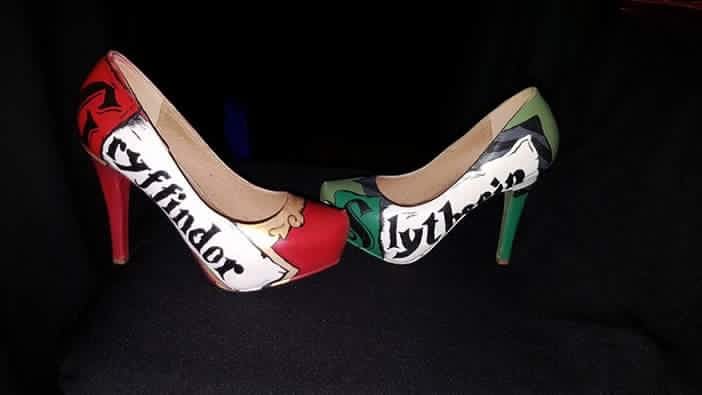 “We stayed up till 3am most nights putting wings on Ferrero Rochers and searching eBay for trinkets.

“I even had the bridesmaids over to cut up the 20 copies of the books we’d bought to make the bouquets. 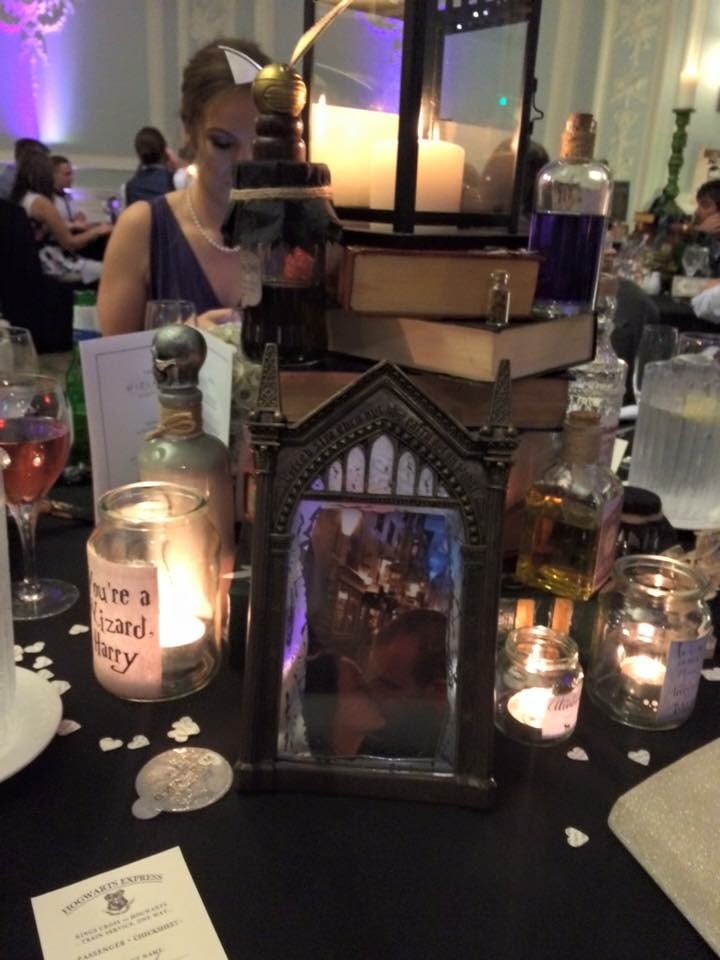 “It was a mammoth undertaking. We had to take a trip to Harry Potter world in London just to get some last-minute bits.

“It was everything I wanted. It was the most magical wedding imaginable.

“The hotel staff were arguing over who was going to work that night – it was really lovely.” 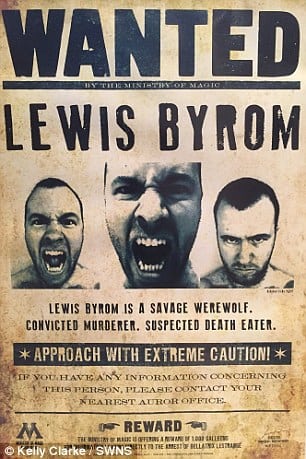 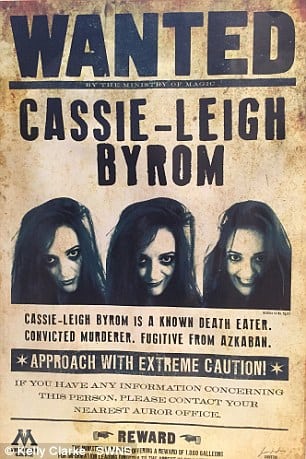 The couple met three-and-a-half years ago through a mutual friend at the finance company where Cassie works.

Lewis, 34, an account manager, suggested the unusual theme for their wedding after his touching proposal.

Before the Harry Potter wedding ceremony, Cassie had a tattoo of the Deathly Hallows and Lewis had one of the Dark Mark, the symbol of Lord Voldemort and his Death Eaters.

In order to get themselves in the mood, the spellbound couple even watched all seven films in the days building up to the big day, on November 1. 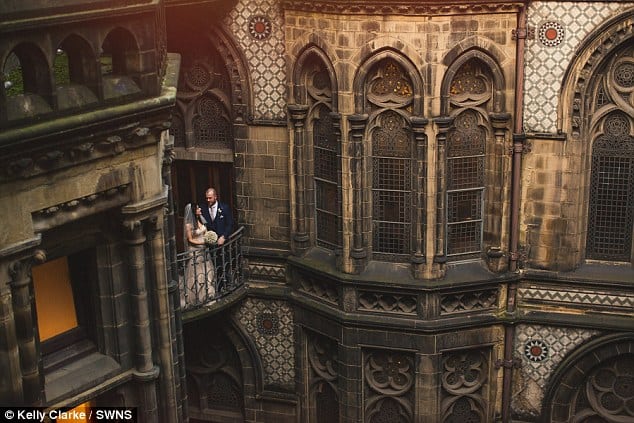 At the ceremony in Manchester’s gothic Town Hall, the couple exchanged vows and Cassie’s niece, Leigha, 18, performed a reading from The Order of the Phoenix.

The rings were presented by best man, Stephen Myerscough, 34, on a copy of the Half Blood Prince, and were inscribed ‘Always’ – Severus Snape’s pledge to Harry’s mum, Lily.

The bridal party each wore Golden Snitch bracelets, and the couple acted out the books final battle between Harry and Voldemort with wands for amazing photos.

“When I suggested a Harry Potter theme she was thrilled.

“I love the films, but Cassie’s definitely the biggest Harry Potter fan I know. She must have watched the films at least 30 times.

“Her face just lights up. It’s one of the reasons I love her.” 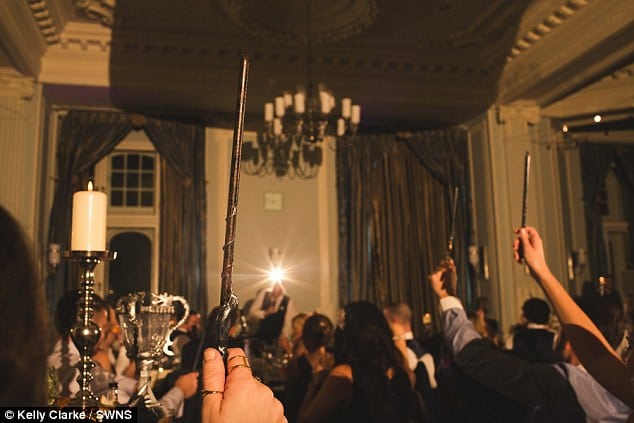 Cassie added: “Our parents thought we were a bit bonkers at first, and whenever people came to our house, they said it looked like a jumble sale.

“But in the end they were really excited, once they realised how much effort we were putting into it, especially Lewis’s mum.”

At the hotel in Cancun where they stayed on their honeymoon, staff even set up a big screen in the suite for them to watch one of the films.

And now the stress of planning such an extravagant wedding is finally over, Cassie has gone back to where it all began and is reading the Philosopher’s Stone for the second time.

She said: “The books were always my favourite. It’s where my love for Harry Potter began. I’m looking forward to having kids now so I can read it to them.”

We helped the newlyweds get the best deal possible for sharing their heartwarming Harry Potter wedding story.  We’ll consider any story that would make an interesting, heartwarming, or eyebrow raising story.  Get in touch using the Story Valuation form on this page and we’ll tell you what it’s worth.

Whatever you send us on the form is for valuation purposes only and will never be used without your permission.  There is no obligation until you tell us to go ahead.  We’ll help you tell your story, your way.  For more information about how to sell a story, see our Sell My Story page.

If you would like to see other wedding stories similar to the Harry Potter Wedding story, check out some of our recent clients here: https://www.sellusyourstory.com/news/category/wedding-stories/