FOR SYLVIA, 30, AND IAIN, 37, GETTING HITCHED WAS THE LEAST OF THEIR PRIORITIES. HAVING BEEN TOGETHER FOR NINE YEARS, WITH TWO YOUNG CHILDREN AND BUSY WORK LIVES THE PAIR THOUGHT THEY WOULD NEVER TIE THE KNOT. 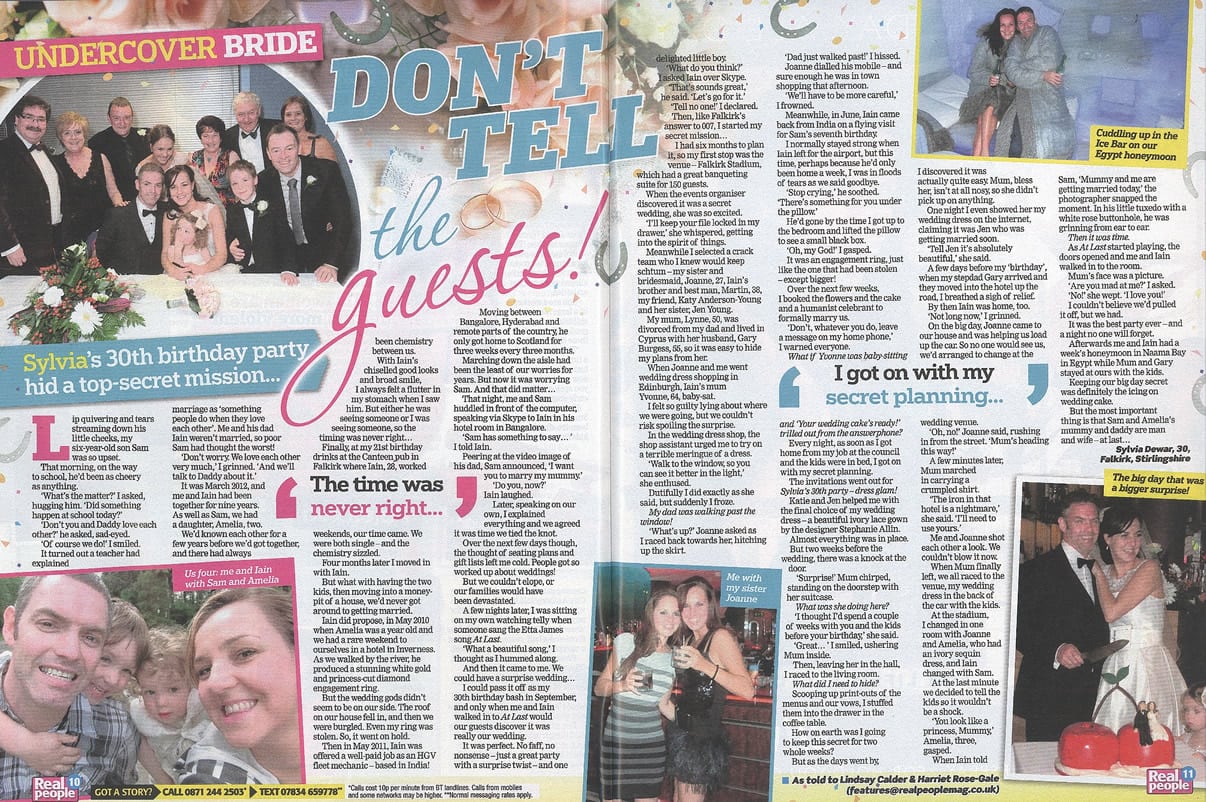 BUT DESPERATE TO MAKE THEIR RELATIONSHIP OFFICIAL, SYLVIA HATCHED A PLAN TO SURPRISE THEIR FAMILY AND FRIENDS BY ORGANISING A SECRET WEDDING!

THE COUPLE KEPT QUIET FOR NINE MONTHS WHILE THEY SNEAKILY PLANNED THEIR BIG DAY.

GUESTS WERE STUNNED WHEN THEY ARRIVED AT WHAT THEY THOUGHT WAS SYLVIA’S 30TH BIRTHDAY PARTY TO DISCOVER THE PAIR WALKING DOWN THE AISLE!

– While most women soon to get married would spend hours with their friends and family gushing over their wedding plans, Sylvia was keeping hers hush-hush.

– The sneaky bride-to-be spent nine months fibbing, sending private emails and setting up secret trips to bridal shops to set up her own surprise wedding!

– The idea popped into her head when she was sat on the sofa, watching TV one evening and her favourite songs ‘At Last’ came on.

– As a self-confessed romantic, she started to think about the wedding the couple had longed for.

– But work commitments and young children meant the pair had never managed to become man and wife, despite being engaged for almost four years.

– Sylvia even had her engagement ring stolen when their house was burgled, bringing an abrupt end to their marriage plans.

– But she never gave up hope that one day they would walk down the aisle.

– Before Iain left to go back to India, where he works as a mechanic, he had a surprise of his own in store.

– As they said their goodbyes Iain told Sylvia he had left a present for her upstairs.

– She dashed up to their room and sure enough on the bed there was a little gold box – with a replacement ring inside.

– With a new ring on her finger, Sylvia felt the urge to tie the knot even more.

– She called Iain and told him about her idea to organise a surprise ceremony and he didn’t take any convincing.

– With Iain away, Sylvia was bursting to share the exciting news with someone so confided in her sister Joanne, who she asked to be her bridesmaid.

– The pair organised invitations to go out to 150 of their friends and family, disguising their big day as another milestone – Sylvia’s 30th birthday party!

– They instructed guests to arrive on time and ‘dress glam’ for the occasion.

– Iain’s best man, his brother, Martin, was the only other person let in on the secret, a month before the big day to give him time to prepare his speech.

– The mum-of-two even managed not to blurt it out to their children, Sam, seven, and Amelia, three.

– Sylvia also lied to Iain’s mum who babysat the children while she went to her wedding dress fitting.

– She tricked her own mum, Lynn, into approving the wedding dress by showing her a picture and telling her it was for a friend too.

– But the fib became even harder to keep when Lynn, who lives in Cyprus, came to stay two weeks before the party.

– Sylvia was forced to cover her tracks and hide all of the paper work and set up a secret email account.

– Even staff at the venue were kept in the dark until the very last moment.

– And emotions were high as ‘At Last’ blared out of the speakers as Sylvia walked down the aisle.

– Sylvia said: “We had always planned to get married but had just never got round to it.

– “I desperately wanted to tie the knot before I turned thirty so thought why not combine the two?

– “It was so difficult keeping it for everyone, especially our parents.

– “When Joanne and I were dressed, my parents came in and the look on their faces when they saw me in a wedding dress was fantastic.

– “I think I’ve been forgiven for the little white lies I had to tell everyone to keep our wedding a surprise.

– “It was a lot of work and quite funny at times. I can’t believe we pulled it off.

– “Our children thought it was great too.

– “It made all the hard work to keep it a secret worthwhile.”

Do you have a story to sell to the press?  Read more on our Sell My Story page, or simply fill out the form on the left hand side of this page.