Two sisters are celebrating after they both gave birth on the same day in the same hospital – just hours apart.

Inseparable siblings Claire Jelley, 33, and Emily Mayhew, 31, were delighted when they discovered they had fallen pregnant within days of each other. Despite there being a week between their due dates Claire and Emily promised they would support each other when they went into labour. But they defied the odds of 1,000-1 when they both gave birth on the same day to healthy babies at Kettering General Hospital just hours apart on August 23.

Younger sister Emily, from Great Bowden, Leics., who has two other children with partner Richard King, 39, gave birth first to son Rupert, who weighed 8lbs 13oz at 7.20am. After texting her sister encouragement, Claire was then rushed into the same hospital before giving birth to daughter Eva by caesarean section, weighing 7lbs 6oz at 4.53pm.

The pair never expected to find themselves crossing paths on the maternity ward, with each of Emily’s two other children having been late. Yesterday (Thurs) proud mum Claire, a part-time teacher from Market Harborough, Leics., said: “We’ve always been competitive and were both vying to be the first to give birth. We did make a pact that whoever went into labour first the other would be on hand to support and encourage but we never thought we’d give birth on the same day.”

“We were on different wards, I was in the maternity ward and she was downstairs so we were directly above each other. We were texting each other to keep in touch and talk about what we were going through. I could never believe we could have given birth on the same day. We knew we were going to be close but nothing like this.”

“They are both really healthy babies, but it helps a lot as all our post natal classes an appointments are now on the same day. We can get all of them together, and of course in future, joint birthday parties, which should save some money. Eva is wonderful, and she has a great older brother in Archie who just wants to play with her and hug her all the time.” 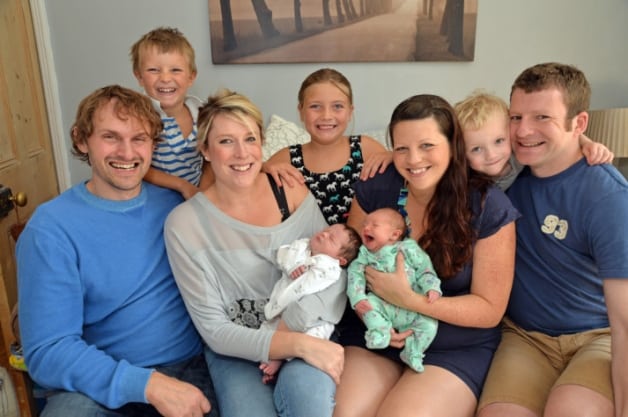 Mum-of-three Emily added: “I look after what goes in [to Rupert] and Rich looks after what comes out at the other end.

“He’s a real modern man. It was really helpful having Claire in the hospital at the same time, you know she’s always been my big sister and there for me. It made it feel really supportive, having her just directly above me. We were texting each other throughout. I still can’t believe it happened that way though. When I fell pregnant we went to tell Claire and Richard we were amazed when they told us Claire was pregnant too.

“There was just five days apart, it was really unexpected. But all my children so far had been late, so we never expected really to be even close when the day actually came.”

Claire’s proud husband Oliver, 32, who is managing director of Orange Juice Communications, added: “It’s nice really. August 23rd will always be a very special day in our family now I guess. The whole thing was quite momentus really, we joked that there was a chance it might happen, but we were never really being serious. The difference was due to be a week, so you never expect a gap like that to close.”

Proud grandfather John Meyhew, 62, added: “We like to have a good knees up in the Mayhew family, and this will be the perfect excuse.”