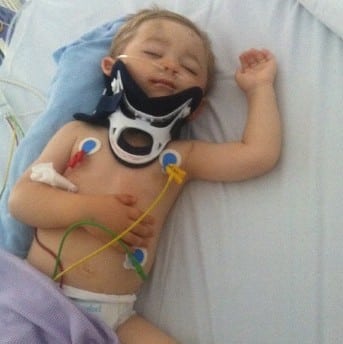 LITTLE LOUIS, 2, ALMOST DIED IN A FREAK ACCIDENT DURING A GAME OF HIDE AND SEEK.
HE TRIED TO CLIMB INSIDE A WARDROBE TO SCARE HIS NAN LESLEY, 54, WHEN IT FELL ONTO HIS HEAD – FRACTURING HIS SKULL. LESLIE FOUND HER UNCONSCIOUS GRANDSON JUST IN TIME AND GAVE HIM THE KISS OF LIFE BEFORE HE WAS AIRLIFTED TO HOSPITAL AND PUT IN AN INDUCED COMA FOR FOUR DAYS.
TOLD BY PARENTS PETER, 27, AND KAYLIE. 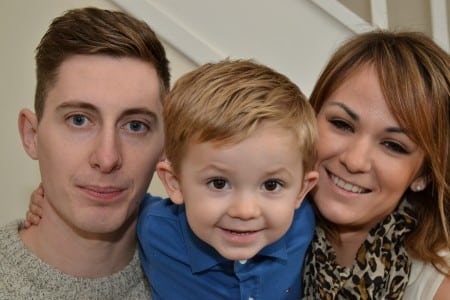 “Louis. Louis. Where are you?” I cried moving between bedrooms, turning each one upside down trying to find him. My mischievous two-year-old was always getting lost on purpose and Hide and Seek was his favourite game.
Every morning, without fail, he would make me late as I searched the house from top to bottom trying to find him because he’d snuck off the minute my back was turned. More often than not my cheeky chappy could be found giggling from behind his bedroom door or from under his bed. Although he’s not quite got the hang of the game. If Louis thinks he’s been missing a bit too long we’ll hear a little voice cry out, “Mum, Dad, I’m over here,” and out he’ll pop.
Louis never likes to leave us for too long which is why when my husband Peter, 27, offered to take me out for a meal for my birthday without him, I felt incredibly guilty. “You two go out and have a good time,” my Mum Lesley reassured me as I kissed goodbye to Louis before Peter and I set off for the restaurant. The next morning we were getting ready to pick him up when suddenly my phone lit up.
The screen showed that it was my mum calling but when I answered the voice on the other end belonged to someone else. “I’m calling about your son, Louis” the stranger said. “There’s been an accident.”
“Well is he OK?” I stammered back. There was a lengthy pause. “I think you had better come right away”
“Why wouldn’t they say if he was alright?” I sobbed to Peter as we grabbed our coats and made a dash for the house. Driving up the road we spotted two ambulances parked by the house my Mum Lesley had visited with Louis. As soon as we stopped I flung open the car door and dashed over to an ambulance to find Louis lying inside with an oxygen mask strapped to his face. “What has happened to you darling?” I asked softly but Louis couldn’t answer because he’d been put into a coma. Luckily my mum was on hand to explain. 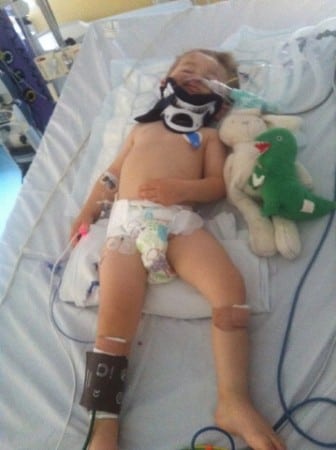 She had taken Louis round to a house she was renting out. While she was inspecting one of the rooms Louis disappeared into another one. The next thing my Mum heard was a thundering crash. There was no furniture in the house – except for a large wardrobe in the main bedroom. It towered up the wall just like the magical one from The Lion the Witch and the Wardrobe. It seemed Louis had been up to his usual hide and seek tricks again…
He must have opened the doors and tried to climb into the wardrobe but things didn’t go to plan and the heavy furniture ended up falling up top of him. After hearing the loud crash my mum burst into the room to find Louis trapped underneath it as it crushed his body. She struggled to pull it off and when she eventually did she discovered Louis was unconscious. He was completely floppy and had stopped breathing.
Instead of panicking, instincts took over and my Mum gave Louis mouth to mouth –  although she’s never had any training she did her best to imitate what she’d seen on TV. She tired desperately to get him breathing until an ambulance arrived and once they did Louis was sedated at the scene. When Peter and I spoke to the paramedics they told us they’d have to take him to a bigger hospital than our local one – which put me at ease slightly because I knew Louis would be receiving the best care, but at the same time gave me a terrible feeling in my stomach because I knew that it meant Louis’s condition was serious.
He had a small bleed on his brain  – but luckily he didn’t have to go in for surgery. He was in intensive care for three days he had tubes in his noses and wires all over him. He was so afraid we had to tell him they were Fireman Sam’s hoses. Louis spent eight days in hospital altogether and he lost all feeling down the right side of his body. But he was still a typical boisterous two-year-old boy so naturally he wanted to be up running and jumping – his brain was saying one thing and his body was doing another.
Luckily he made a great recovery and now it’s like nothing ever happened.  He doesn’t really doesn’t remember any of it, which is a good thing but I wish he did have some recollection so he’d be a bit more careful in the future. I’m going to have to buy a crash helmet for the next time he suggests we play Hide and Seek!
————————————–
Do you have a story to tell us about?  If you would like to share a story just fill out the form on the right hand side of this page.  We’ll get back to you straight away to tell you if your story could make a good magazine article, and how much it’s worth.
You only need to tell us the basics (just the main points of the story) and we’ll call you back to find out more.  You aren’t obliged to have any part of your story printed until you’re completely happy with the offer and you give us the go-ahead.