Finding a perfect match: We help Jen and Dan sell their amazing story exclusively to a national magazine. After Jen, 32, gave her hubby Dan, 34, her heart, she also gave him her liver and now has been able to give him the best gift ever, a baby boy. 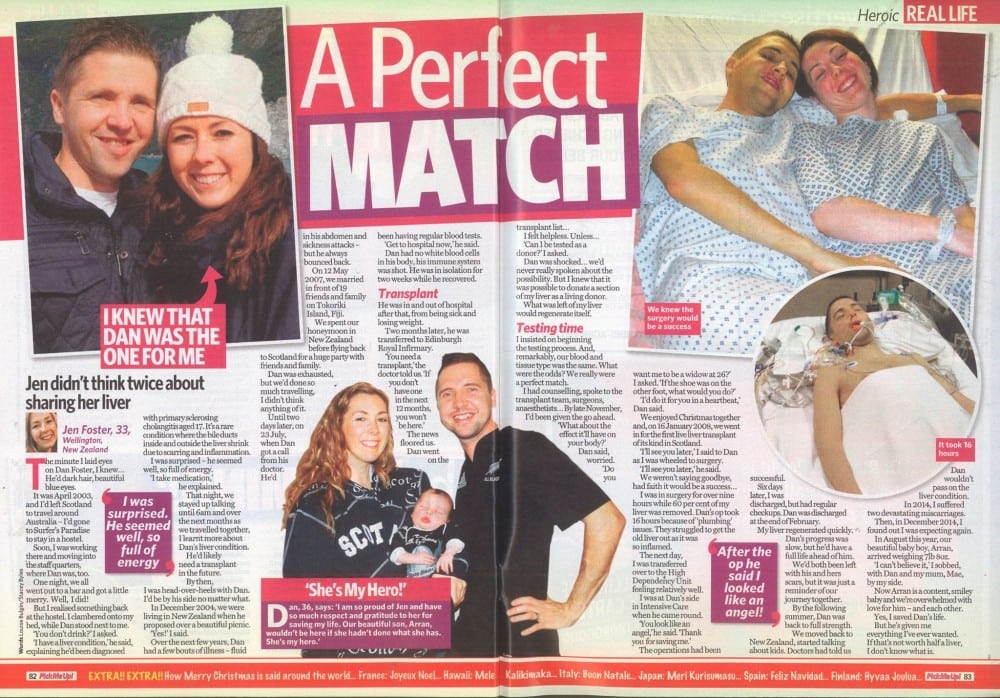 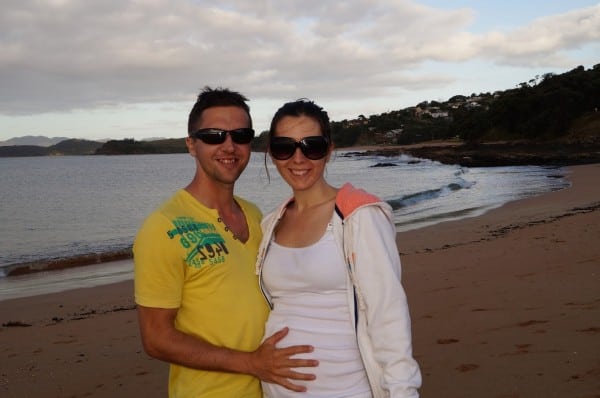 Seven years ago, Jen risked her own life to save her husband’s by donating 60% of her liver in Scotland’s first live liver transplant, if she didn’t her husband had just months to live.

Even though the 15-hour operation was a success, the couple lived in fear that they would never be able to have a baby as there was risk of passing on Dan’s chronic liver condition.

But after extensive tests doctors gave the happy couple the all clear to start trying as new test found that Dan’s deadly liver disease was not hereditary.

The Scots couple who met in new Zealand while travelling can now put the last eight years behind them and look forward to their future with their three-week-old baby Arran.

Seven years ago, Jen risked her own life to save Dan by donating 60 per cent of her organ in Scotland’s first live liver transplant. 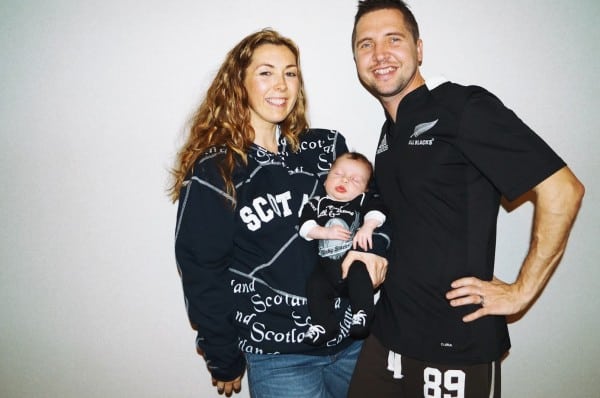 The 15-hour operation was a success but the couple feared they would never have a family as there was a risk of passing on Dan’s chronic liver condition to an unborn child.

But after years of tests and research, they were told it was safe for them to start trying for a baby. And on August 10, Jen gave birth to gorgeous Arran.

Dan, 34, who in September 2007 was told he would only survive a year without a life-saving liver Transplant, said becoming a dad is something he never dared to dream. 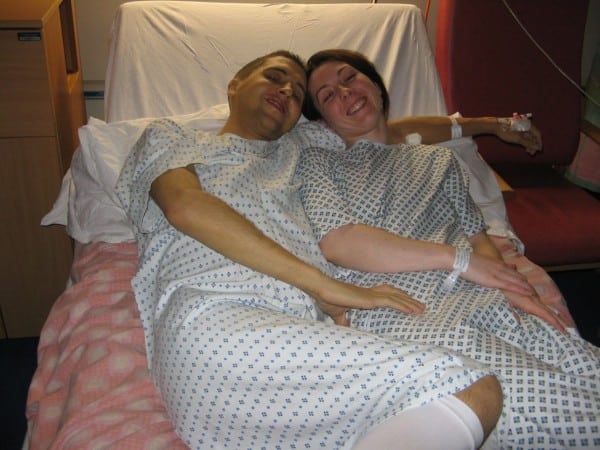 The IT consultant was at death’s door when surgeons eventually agreed to let Jen give him half of her liver.

They wed in May 2007 in Fiji but, four months later, Dan got the news he needed a transplant and Jen immediately volunteered.

After months of consultations and tests, the live operation went ahead on January 16, 2008, at Edinburgh Royal Infirmary and the couple haven’t looked back since.

Jen’s liver regenerated quickly and, apart from a couple of short stays in hospital, Dan’s health has been excellent.

The new mum, who moved with Dan to Wellington, New Zealand, in 2009. 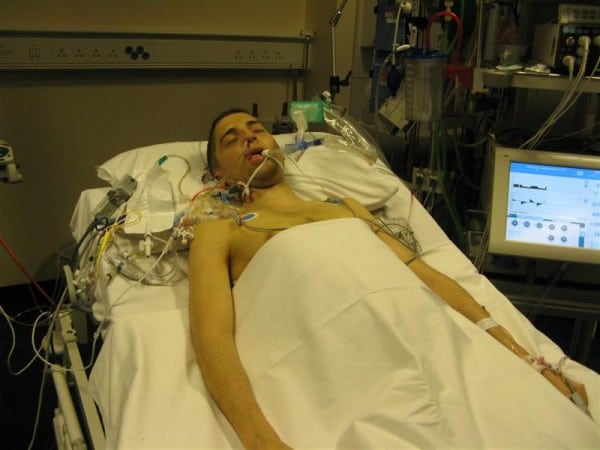 Dan has Primary Sclerosing Cholangitis (PSC), a rare condition where the bile ducts into the liver harden and narrow, causing serious liver damage. He was diagnosed at 17.

After the transplant, the couple did a huge amount of research to see if they could safely have their own child before they even started trying.

Dan believes he is a good example why people should join the organ donor register. He added: “Everyone has the potential to save or change a life. Please inform your loved ones of your wishes about organ
donation. Ultimately, your family have to make the call so, if you are OK with being a donor, please let them know.

Jen said: “Being parents seemed like an impossible dream for us, then Arran came along

“The whole thing has been like a fairy-tale. I was supposed to meet Dan when I did so I could give him what he needed most – my liver. Now I’ve given him something equally as special, Arran.

Dan said:“Luckily, we made it through and now we’re very proud parents of beautiful Arran. When we look at where we were eight years ago, being parents seemed like an impossible dream but, thanks to my incredible wife, I’ve been given yet another wonderful gift. 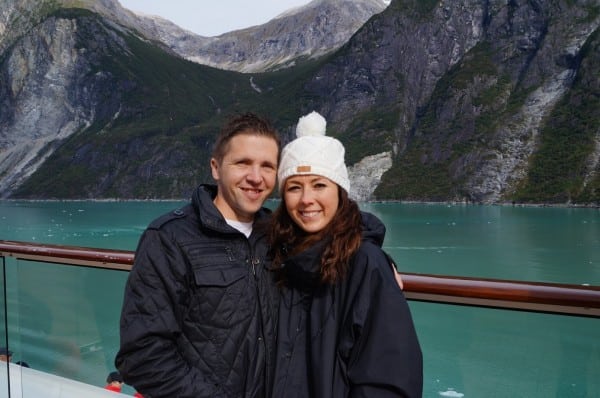 “Jen didn’t just make my life better when I met her – she ended up saving it. To top it all, she has given me a son. I’m going to enjoy spending the rest of my life saying thank you. She is my hero.

“After a lot of research, we found out we could safely have kids as PSC isn’t hereditary and I am only a carrier of my condition so couldn’t pass it on either. It did play a part in us waiting to start a family but better late than never.”

We helped Jen and Dan sell their incredible story exclusively to Pick Me Up! Magazine, who bid the most in our daily story auction for rights to print Heidi’s story.  If you would like us to auction your story as a feature to the highest bidding magazine, get in touch using the story valuation form on this page.

Our service is completely free to you and won’t cost you a penny.  We guarantee to secure you the highest fee possible.  There is no obligation when you fill out the story valuation form – everything you send us is completely confidential until you tell us otherwise.

For more information about selling your story to the national press, you can read our Sell My Story page.