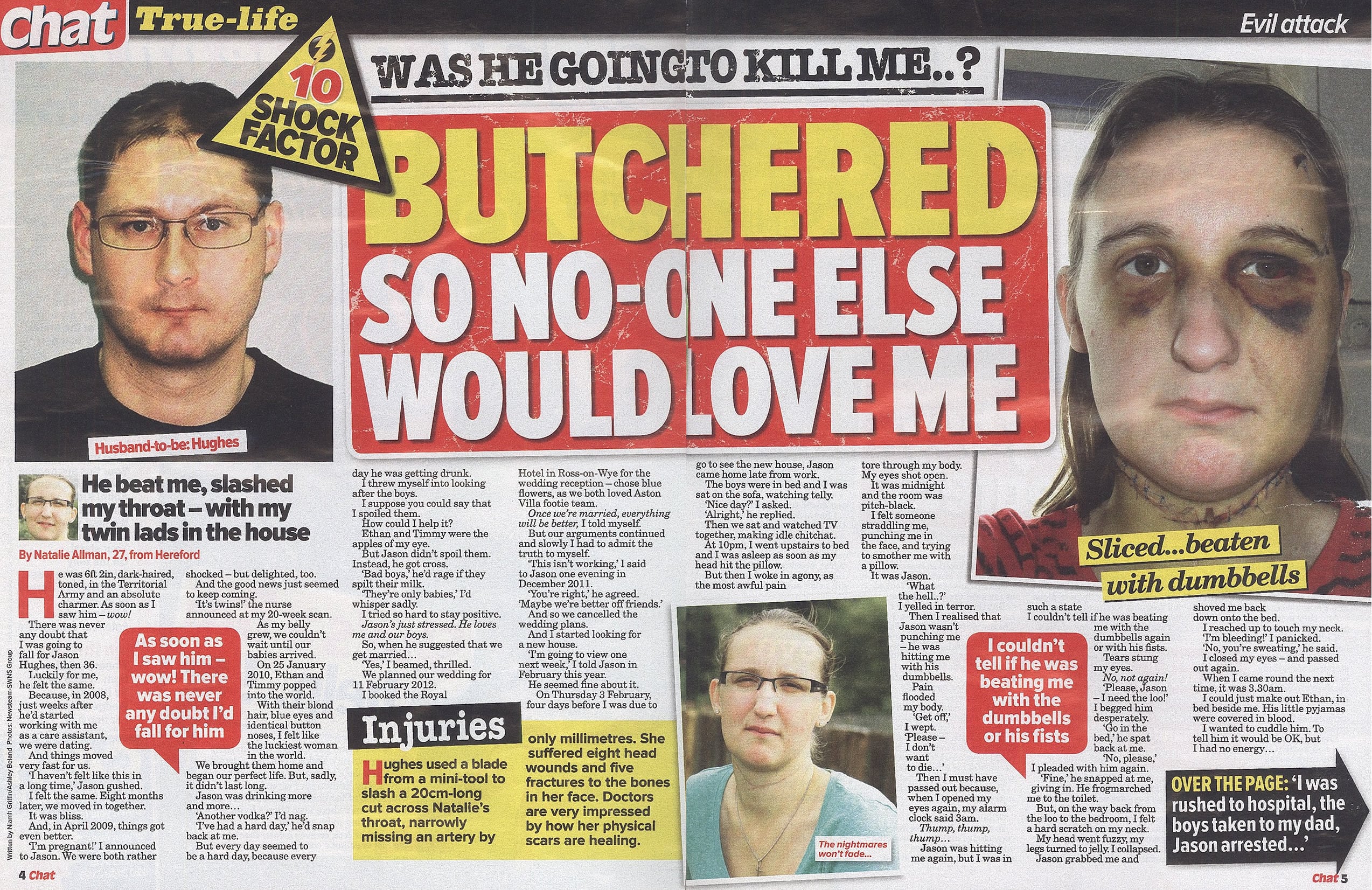 NATALIE WAS ABOUT TO START A NEW CHAPTER OF HER LIFE.

SHE DECIDED TO LEAVE HER FIANCEE JASON – THE FATHER OF HER TWIN SONS – AND WAS SET TO MOVE FROM THE FAMILY HOME THE NEXT WEEK.

BUT HER PLANS CHANGED WHEN JASON LAUNCHED A VISCOUS ATTACK – TORTURING NATALIE FOR SEVEN HOURS AS THEIR CHILDREN’S LAID IN THE BED NEXT TO HER COVERED IN THEIR MUM’S BLOOD! 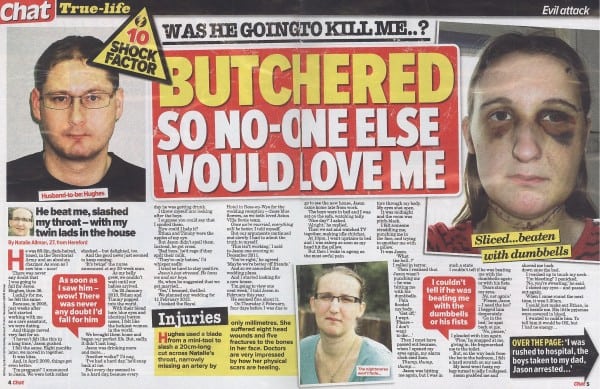 Tortured by Fiancee for Seven Hours

Natalie, 26, had grown tired of Jason’s excessive drinking so in December she told him she was leaving him.

They continued living together until Natalie could find other living arrangements for her and their sons. She was looking forward to moving out the following week when her terrifying ordeal started at midnight on February 3.

Suddenly she felt a pillow over her face as Jason tried to smother her.

When the attempt failed, he continued to bludgeon her with a dumb bell before finally slashing her throat – narrowly missing her major artery by only a few millimetres.

As she bled on the bed, her frightened children climbed into bed with her.

Natalie remembered through tears: “I was shocked because he had never been violent toward me before.

“There were three attacks, at midnight, 3am and 6am. He tried to suffocate me with the pillow all three times.

“At midnight I woke up and he was over me with one leg either side punching me. I thought it was with his fists but I later found out it was with a weight. It was pitch black in the room.

“I don’t know if I fell asleep or was going unconscious but at 3am I woke up and needed the toilet. He told me to go in the bed and then frog-marched me to the toilet.

“I remember him sitting me down on the bed and that’s when he slashed my throat. I don’t know what happened then, I might’ve just passed out.

“One of our sons Ethan woke up and came into our bed with me. He was covered in my bed.

“When I woke up at 6am, our other son Timmy was next to Ethan in bed too. They showed their pyjamas in court and they were covered in blood.

“Jason punched me again but at 3am he had told me he wasn’t going to hit me again.

“Then at 7am he let me go downstairs.

“When he came down all he said was ‘I didn’t quite do enough to kill you’ and said I’d never see him again. Then he carried on as if it was all normal.”

When Natalie was allowed to dial 999 she was rushed to hospital and Jason was arrested by officers at the scene.

She was treated for the eight wounds to her head and five fractures to her face bones and needed cosmetic surgery to rebuild her throat from the 20cm gash.

But during the court case, Natalie heard that Jason claimed the reason for his attack was to make her look ‘ugly’ to other men.

Defending Jason, Miss Nixon told the court: “His intention was to cause a hideous scar she could not hide if she had dressed up to look pretty.

“He was trying to make her look ugly to other men.”

Jason was convicted of malicious wounding with intent to cause grievous bodily harm at  Crown Court on August 2 and sentenced to nine years in prison.

Luckily the children were not physically harmed during the attack.

Natalie said: “I just hate him for what he put the children through. I don’t understand it.

“Fortunately they don’t seem to remember the night but they remember my injuries and call them ‘baddies’.

“It was a big relief when social services told me he will never be allowed to see the children again.”