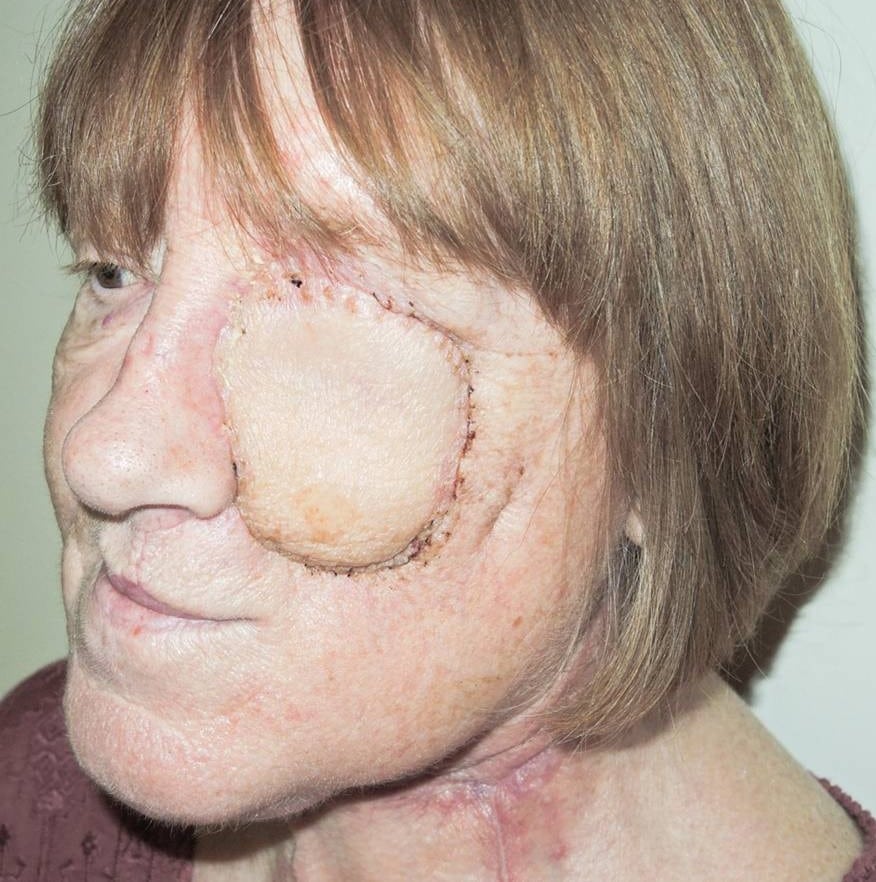 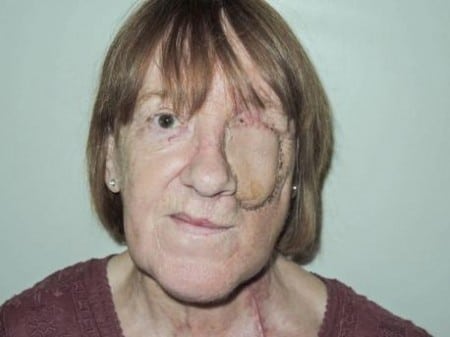 Discovering a large tumour had been secretly spreading across her face came like a ‘bolt out of the blue’ for Ann, 69.  The grandmother was left with no choice but to have her jaw, left eye and some of her teeth removed. Surgeons used state-of-the-art technology to rebuild the left side of her face – which they replicated using bone from her leg. Ann had her face rebuilt – using a computer scanner.

It took over a week before Ann could bring herself to meet her reflection in a mirror but she is now looking on the bright side… And still keeping a close eye on her grandchildren. 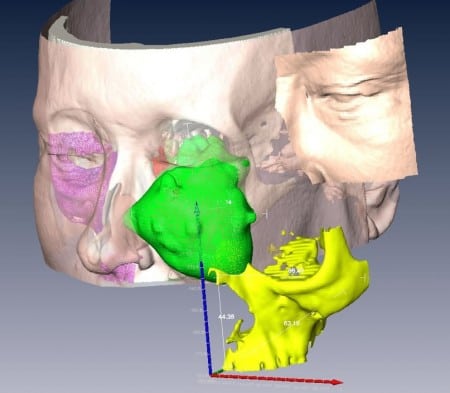 Ann, visited her GP when her frequent headaches were causing her concern. But the cause was not the sinus problem she presumed it to be but something far more sinister – a life-threatening tumour was growing behind her eye. Left undetected the cancer had been spreading rapidly across the left side of her face. To save Ann’s  life surgeons had to remove a large portion of her jaw, her left eye, and numerous teeth to get rid of the cancer.

Once this procedure was complete, they began the painstaking work of reconstructing of her face using innovative computer technology to rebuild the damaged area. The technology allowed the team to electronically scan the opposite side of her face to build a 3D profile that surgeons could then replicate. 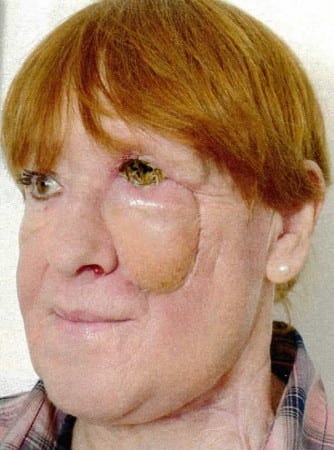 Ann underwent a ten hour operation in a mxillofacial unit which specialises in surgery for facial trauma, deformity and head and neck cancer. The operation involved surgeons taking a portion of bone from her leg to reconstruct her jaw, and a number of tissue grafts where arteries and veins had to be painstakingly re-connected using micro surgery.

Ann said: “I’ve always been healthy so it was a bolt out of the blue when the doctor referred me to hospital where the scan revealed a tumour. “The hardest thing to take was the loss of my left eye. ‘The surgeons told me it was just rotten luck but that I was lucky the tumour had been growing outwards rather than inwards. My father died of cancer but I was told that many types of cancer were now curable as long as they are caught early enough.’

“The hospital offered me a false eye but I don’t want that staring back at me every morning. I’m as fixed as I’m going to be and that’s good enough. My grandchildren asked if it would grow back. I told them it wouldn’t but I’d still be keeping one eye on them.”

“I can’t praise the staff enough. They kept me informed every step of the way and have been very caring and kind from the surgical team to the nurse who bought me a cup of tea in the small hours of the morning. I put my faith in the hospital and they saved my life.  I told myself it could have been worse and am now focused on getting on with my life. You have to be positive.” 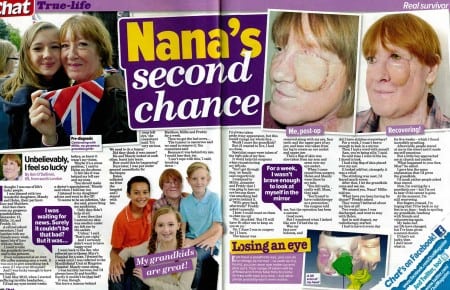 Nana’s Second Chance “I’ll be keeping my eye on you!”

If you have a prosthetic eye, you can do most things as normal – as soon as it is healed, you can wear eye make-up and play sport.  Your range of vision will be affected and it may take time to come to terms with how you look – but other people probably won’t even notice.

For more information about the symptoms to watch out for if you think you could have eye cancer or a tumour behind the eye, please check out Cancer Research’s page: http://www.cancerresearchuk.org/cancer-help/type/eye-cancer/about/symptoms-of-eye-cancer

If you would like to share a similar (or different) story to raise awareness and help those going through a similar situation, please contact us today.  You can tell us a little about your story using the form on the right hand side of this page.  You can also read more on our Sell My Story page.