My stomach tightened in nervous knots about flying so close to my due date. I was off to Santorini, Greece to see my sister-in-law, get married. Packing my bag ready for the holiday of a life time, doctors reassured me I was fine to fly. 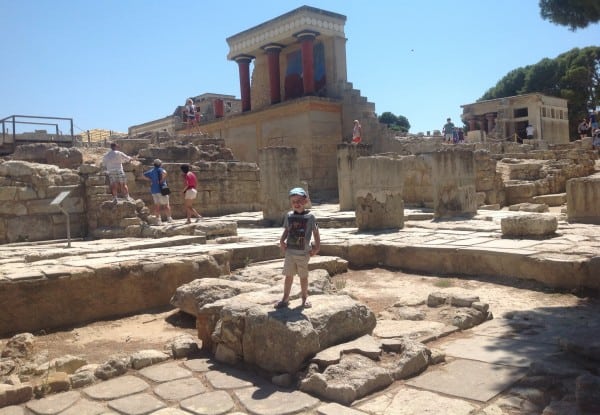 ‘Imagine if ended up having the baby while in Greece,’ I joked to my husband, Phil, 34, packing my flip flops.   ‘Your water breaking while sunbathing beside the pool wouldn’t be ideal,’ he said laughing. I was due in seven weeks and received my fit-to-fly letter from the doctors. My nerves subsided when clutching the piece of paper.

Sun, sea and a wedding: how magical. My baby kicked with excitement. ‘Were going on holiday!’ I eagerly said looking down at my bulge  ‘All aboard,’ my son Bradley, seven, screamed after we settled into our seats on the plane.  We finally arrived, after a short flight which felt like a life time. As the wedding wasn’t until Thursday we had a few days to relax by the pool and watch Bradley splash around.  ‘Catching some rays for the big day?’ I chuckled to my sister-in-law. ‘I hope I don’t burn. Red skin wouldn’t look great in a white dress,’ she replied, barley opening her mouth. Later, Phil, Bradley and I, walked along the beach and admired the view. Bradley grabbed my hand. Phil put his arm around my shoulders and I rubbed my belly. ‘A perfect little family,’ I said, smiling to Phil.

We slowly strolled back to the hotel and I hung my black maxi-dress in the wardrobe. I stared at it lovingly. ‘The next time I’ll have this on is when I’m getting ready for the ceremony,’ I said to Phil glowing. It was Wednesday evening and everyone was sat around the bar celebrating. I was so tired. I decided to be boring and popped off to bed early. ‘Good night everyone. I’ll see you all tomorrow,’ I said enthusiastically. I kissed Phil on the lips and I went off to bed with Bradley. ‘Good night my little prince,’ I said to my son.

As soon as his head hit the pillow he was out for the count. I awoke the next day with Bradley jumping at the bottom of our bed. ‘Wake up mum, let’s go swimming!’ he shouted. The sun was beaming through the curtains and it was finally the day of the wedding. After a long morning of watching Bradley swim. The sun had already taken its toll on me. ‘I’m going back to the room to have a little nap Phil. Wake me up in an hour,’ I said sleepily. ‘Don’t sleep through my wedding. It starts in four hours,’ Phil’s sister replied cheekily. She gave me a little wink.

I hobbled into bed and pulled the rustling hotel sheets up to my cheek – I was out for the count. I woke up an hour later with the sensation of needing a wee. It was almost painful. ‘Keep hydrated.’ I mimicked my doctor.   ‘He’s not the one weeing for Britain,’ I said to myself.  I couldn’t wait to have a cool shower and slip into my black maxi-dress with my hair and makeup looking wedding-ready.I was excited to see Phil give his sister away and Bradley walk down the aisle as a perfect page boy. 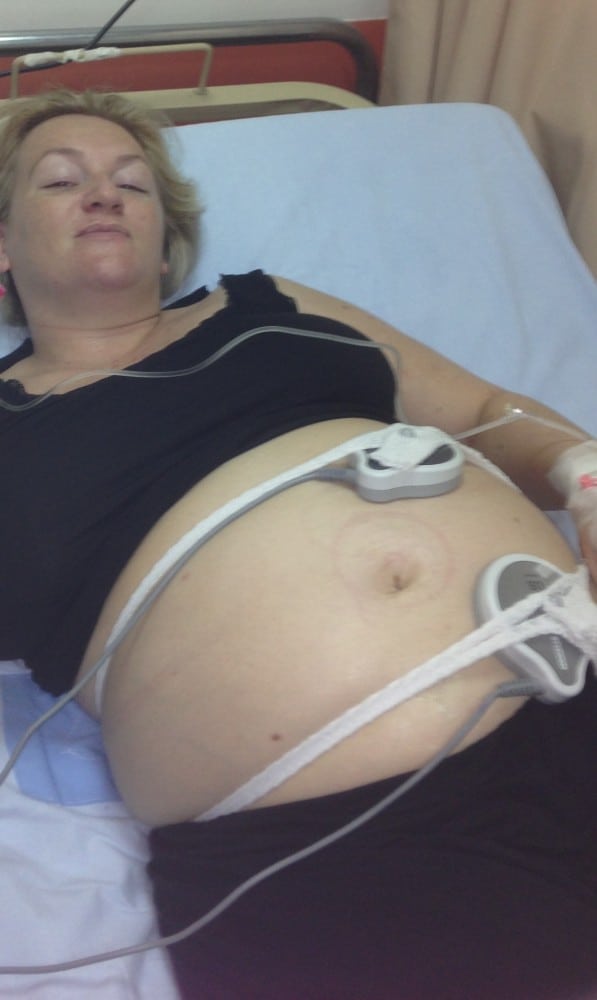 As I stood up to empty my bladder, an almighty shooting pain came blasting up my whole body from my womb. I fell backwards onto the bed, trying to steady myself, I took a deep breath.  I slowly tried to stand again and the same pain went shooting through my stomach. I clenched over in agony, as I attempted to stand for the third time. My waters had broken. With wide eyes and a panicked expression I could hear my heart beat in my head and my palms were sweating. ‘Phil!’ I scream his name so loud. My voice was trembling. I curled up into big ball on the cold floor. Phil came rushing to my aid, followed by his mum and the bride to be.

She had her hair in rollers and half a face of make-up on. ‘I’m so sorry,’ I said, mortified. They picked me up off the dusty floor. ‘I need to call an ambulance,’ said Phil’s mum, in panic.  ‘I can’t believe you’re having a baby on my wedding day,’ the bride said unsympathetically. ‘I can’t believe it either,’ I said. ‘God, I’m sorry.’ I found the translation for. ‘Help, I’m having a baby.’ on my phone.  ‘I was lounging around the pool two hours ago, now I’m on my way to hospital,’ I said crying.  I was rushed to a local shack of a hospital in Santorini. I was so scared. They quickly injected me with steroids to help build up my baby’s lungs. I was confused and scared and everything was happening so fast.

‘They’re taking you to a bigger, nicer hospital on the main land,’ Phil said, pushing my hair back to calm my nerves. It was so hot and bumpy in the ambulance, I thought my baby was going to pop out.‘What is that?!’ I said in absolute shock. ‘Now calm down, that’s the plane you’ll be boarding to take you to Crete so we can deliver our baby,’ Phil said. I could hear the uncertainty in his voice. It looked like something out of an Indian Jones film.  ‘I’m not getting on that plane,’ I screamed in discomfort. It looked so old and rotting. ‘Where’s Bradley?’ I said, grabbing Phil’s hand tightly.  ‘He’s with my sister, he’s safe enjoying the wedding,’ Phil reassured me. I had no choice. I plucked up the courage and boarded the rickety plane. I thought I was going to give birth in the air or worse.

As soon as I got there I was rushed to the ward. I had electrical pads, blood pressure and heart monitors and fluid drips attached to me: I looked like a science experiment. But it helped stall my pregnancy until my body was ready. An agonising six days later. I was still in the hospital with no baby. The wedding was over and everybody had already touched down back home.  ‘Where is my husband?’ I said slowly to one of the nurses. ‘Ahh, I, umm,’ she mumbled back in confusion. Phil had gone to get me some water. The worse part about it all was the language barrier.

They didn’t understand my needs and we communicated mostly through hand gestures. I decided to teach myself Greek from my phone: words such as cold, hurt, pain and hungry.  My eyes rolled around in my panicked head and I took a deep breath. I can’t believe this is happening to me. It was like an episode of EastEnders. Phil had rented a house and car just 10 minutes away from the hospital. ‘Your mum and dad are coming over to take care of Bradley. I can spend more time here with you,’ Phil said. He was so caring. Out of nowhere, the windows rattled uncontrollably and the floor began shaking violently.

The equipment moved and all the signs in the hospital were swinging and the lights on the ceiling were rocking. ‘Help!’ I yelled, I felt the pads, needles and wires tugging on my skin as the machines were sliding away.   Phil leaped on top of me to protect me. It was an earthquake! Just as soon as it had started, it came to an end. The doctors and nurses did their best to reassure me. ‘This is the holiday from hell, isn’t it Phil?’ I said. ‘I think we’ll look back on it one day and laugh. It’s an experience to say the least,’ Phil said, with a smile on his face. He still held my hand so tight. He was putting on a brave face but I knew deep down he was as scared as me.

My contractions were getting worse. I knew she wanted to come out. I was only 2cm dilated. The doctors looked worried and the nurses were running around like head-less chickens. Phil rubbed my head to comfort me. My baby’s heart rate slowed right down and they needed to get her out as soon as they could. Hearing the doctors and nurses chatting in Greek made me frightened. It didn’t help that they were raising their voices. ‘We have to get baby out now,’ a doctor said to me. I looked at Phil in absolute terror.

Suddenly, the windows were shaking again, the floor was trembling and the equipment which the nurses had secured was swaying. I couldn’t believe it. It was another earthquake. I had to make it over to the door way with electric pads, wires and needles trailing from my body. In a matter of seconds the terrifying earthquake was over again.  I was put sleep immediately and I had to undergo an emergency caesarean.  During the horrifying procedure I lost over half the blood in my body, five pints, and needed an emergency blood transfusion as soon as possible. I had to lay there for two hours with my Dad keeping me calm by my side. Where they pumped the blood into me, it was like ice travelling through my veins. ‘It’s a shame that having a Greek blood transfusion doesn’t make you tan,’ I said to my Dad with all my strength.

When she was born Jessica weighed just 4lbs, she was so tiny. And after 12 days of hell, I could finally hold my baby in my arms and kiss her tiny hands. ‘She’s so perfect,’ I wept to Phil. Fifteen days later I was finally discharged from hospital, two and half weeks after arriving on the holiday of a life time. Phil wheeled me out of hospital. I took my first breath of fresh air in just over two weeks. The hot sun on my skin was overwhelming. I was devastated that Jessica was too tiny to leave. At night I couldn’t sleep thinking of my little baby all alone in the hospital. A long and tedious six days later. Jessica was discharged and we could finally bring our baby home.

‘It’s all over,’ Phil whispered to me. I sank into his body with relief. Two days later, Bradley and Phil flew home. I was flown home by an air ambulance with Jessica tight in my arms the same day as Phil and Bradley. As I flew over England a weight lifted off my shoulders. ‘Finally home,’ I said to Jessica and I touched her tiny nose.  Being reunited with all my family was lovely and they all got to meet Jessica for the first time. But our troubles were far from over. Jessica has no NHS number, no British passport and had a dual nationality. After three agonising months of daily phone calls, I eventually got in touch with someone useful.  Jessica now has her own NHS number, her own British passport and is a full British citizen. The romantic holiday of a life time didn’t exactly pan out, so Phil booked our first family holiday to Spain. I saw so many heavily pregnant women. “They have no idea what they have got themselves into,” I said to Phil laughing.

If you would like to sell a story to the national press, contact us by filling out the story valuation form on the right hand side of this page.  We cannot be beaten in terms of price and reach.  We guarantee the most money for your story and a full read-back before anything is printed.

You can read a small selection of our recent stories here: https://www.sellusyourstory.com/true-stories/