CATHERINE, 28, FELT SO LUCKY TO HAVE MET HER BOYFRIEND, ADAM, 31. HE WAS SUCH A GENTLEMAN AND TREATED HER LIKE A PRINCESS. BUT ADAM QUICKLY WENT FROM THE MAN OF HER DREAMS TO A COMPLETE NIGHTMARE WHEN HE SNAPPED AS CATHERINE QUIZZED HIM ABOUT HIS OBSESSION WITH HIS EX-GIRLFRIEND.

ADAM LAUNCHED A BRUTAL ASSAULT ON HER, PUSHING HER OVER AND CLASPING HIS HANDS AROUND HER NECK IN A FIT OF ANGER. ADAM STRANGLED CATHERINE AND LEFT HER GASPING FOR BREATH. SHE THOUGHT SHE WAS GOING TO DIE AS HE SNARLED ‘NIGHT NIGHT, CATHY’. 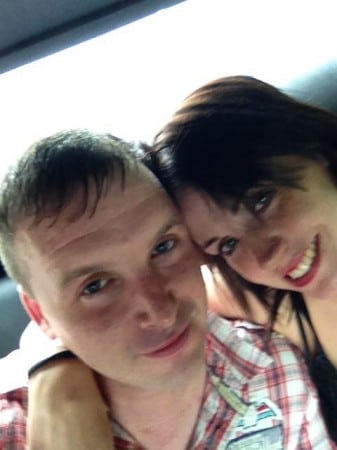 Watching as my boyfriend, Adam, 31, slaved away over the stove, while I sat with my feet up, I felt like the luckiest girl in the world. ‘You’re such a domestic god,’ I giggled, as he prepared a romantic meal for the two of us. ‘What did I do to deserve you, eh?’ ‘Who knows?’ Adam laughed, lapping up the compliments. He was my very own Jamie Oliver and could whip up a storm in the kitchen.

Adam was the perfect boyfriend and treated me like royalty, never letting me lift a finger. I would come home after a long day to find he had ran me a steaming hot bubbly bath and he was constantly surprising me with thoughtful gifts.

Adam knew exactly how to charm me and make me feel special. I couldn’t believe he was the same man my friends had warned me about just months earlier. ‘He’s bad news,’ one had said, as she caught me messaging Adam back on Facebook. But I refused to believe it. We were always chatting online and he seemed nothing but nice to me. Soon we arranged to meet up in person for a drink.

I worried our date would be full of awkward silences and we wouldn’t have much in common, but we hit it off straight away and spent the whole night chatting. He was tall, dark and handsome and just my type, so when he asked for my number I didn’t hesitate in saying yes. I couldn’t believe my luck when we became an item and made our relationship official. But my friends were still worried about me. They had heard rumours that Adam had attacked his ex-girlfriend.

When I confronted him about it he told me not to be silly. ‘It was more like the other way around,’ he protested. ‘She was crazy. She would just go for me, it was all in self defence,’ Adam insisted. He had given me no reason to doubt him, so I believed every word he said.

We moved in together and life seemed peachy. But it wasn’t long before Adam’s nasty side started to show. Once he even pushed me down the stairs. I couldn’t believe it when he told everyone I had fallen. I struggled to cope with his aggressive behaviour and I was constantly calling things off. But Adam kept coming creeping back and promised he would change. I would end up forgiving him and taking him back.

One evening, we decided to have a cosy night in, just the two of us. Adam said he wanted to treat me and planned to cook a Chinese for us both. ‘I better go and check on it,’ he said, chucking his mobile down on the coffee table and heading out to the kitchen. ‘Mmm… it smells good!’ I chirped.

Suddenly I caught site of Adam’s phone screen. He’d left it on the last webpage he had visited – it was his ex-girlfriend’s Twitter profile. ‘What’s this all about?’ I demanded to know, shoving the phone at him. I had my suspicions he was still infatuated with his ex. Suddenly he saw red and snapped.

‘I think you should leave,’ I said, before things got too heated. But Adam refused and started kicking off even more. I knew I had to get out of there, before he turned violent, so I ran for the front door to try and escape. But Adam grabbed me and threw me to the floor, locking the door and keeping hold of the keys to prevent me from going anywhere. ‘You won’t ever be able to do anything without me. You need me,’ Adam spat.

I stumbled up and tried to get out of his way, but he lunged at me again and pushed me over. Burly Adam straddled me, pinning me down, before wrapped his hands around my neck and squeezing tightly.

‘Please… Stop…’ I tried to utter, but the words wouldn’t leave my mouth. Writhing around on the floor, I was gasping for breath and thought I was going to die. 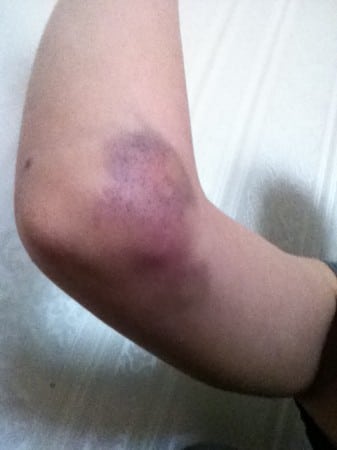 He told me I would  never see my children – who live with their dad – again. And I really thought my time was up. But suddenly Adam stopped what he was doing and burst into tears. ‘I shouldn’t have done that, I’m sorry,’ he said, tears streaming down his cheeks. ‘You know I love you.’ I knew if I tried to chuck him out or told him to leave me alone he would go wild again.

There was only one thing for it. ‘It’s ok,’ I whispered. It was far from ok, but I was terrified that if I told him that Adam would flip and there would be no stopping him this time. I forced myself to keep him calm and pretend as if everything was fine.

Adam wouldn’t let me leave the house. As I climbed into bed beside him, my heart leapt into my chest. I had to spend the night with a man who just tried to strangle me, acting as if I would normally, like nothing was wrong. I barely slept a wink.

The next morning Adam still refused to allow me to leave, he was fretting that I would tell someone what he had done. As the afternoon rolled around, I managed to convince him to let me go. ‘If I don’t pick the kids up from school their teacher will know something is wrong and call the police,’ I said.  He knew I was right, so after I agreed to wrap a scarf around my neck to hide my injuries and wear a hat, he unbolted the door. 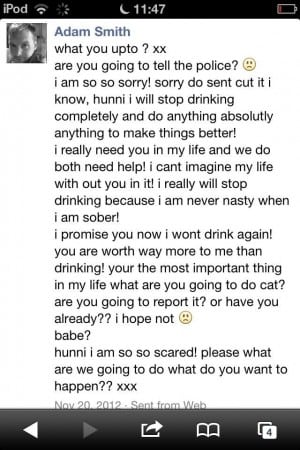 As soon as I was out of his sight, my hand shaking I called the police. When I heard Adam had been arrested I breathed a sigh of relief. At Oxford Crown Court Adam admitted causing actual bodily harm. He also admitted breaching a non-molestation order banning him from using violence against his ex-partner. I learnt he had had 19 convictions for 55 offences and a history of domestic violence against a previous partner.

The abuse he subjected me to appeared to mirror that of his former ex, although she never had the courage to testify against him. But she did come to court to support me and said thank you to me for reporting him and seeking justice. Adam was sentenced to 21 months in prison for the assault and six months for breaching his order, to run at the same time.

The judge told him: ‘This would have been a terrifying experience for any woman and particularly a woman who you knew was vulnerable.’

I am relieved he is out of my life.

Today (25th November 2013) it has been announced that a pilot scheme to protect women from violent partners, known as Clare’s Law, is to be rolled out nationwide. Theresa May, the Home Secretary, is expected to announce the full implementation of the law which forces police to disclose details of a person’s violent past if their partner requests it.  Read more here: Telegraph Article – Clare’s Law to be Rolled Out.

If you have been the victim of domestic abuse or any other crime, and you’d like to speak out and help others in a similar situation like Catherine did, please get in touch with us using the form on the right hand side of this page.  One of our friendly trained team will get back to you to discuss your story and give you the various options for getting your story told.