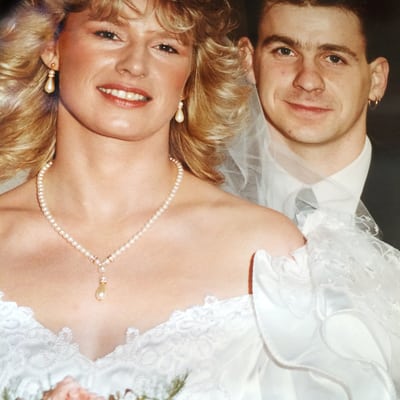 Our Wedding Song Woke Me From a Coma: Maria shared her heartwarming story with the press about her husband waking her up from a coma, following a stroke, by playing her their wedding favourite song.

Strolling round the supermarket stocking up on party food for my husband Steve’s 47nd birthday I should have been in high spirits but I couldn’t ignore the searing pain in my head. “Are you alright there Madam?” the shop assistant asked from behind the checkout. I nodded briefly, rubbing my forehead.

I’d not been feeling my usual perky self the last few weeks. My GP thought it might be a trapped nerve and gave me some tablets but they didn’t seem to be taking much effect. As the day of Steve’s birthday arrived we looked forward to spending a quiet day together with our family at our home in Gravesend, Kent. My dizzy spells had been getting worse and I didn’t feel well enough for a big celebration. 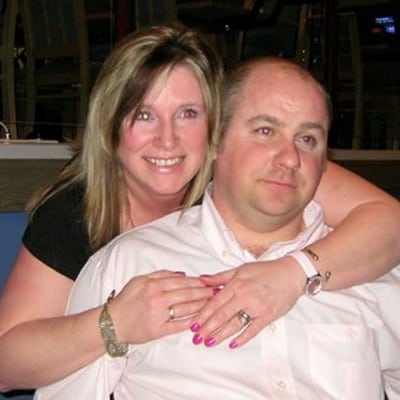 Sitting in the living room with our four children Kyrstie, 20, Kurtis, 18, and Kieran, 16, and Kameron, 14, I tried to keep up with the conversation but I was feeling increasingly delirious. “Are you alright there Mum?” I heard a voice ask but I couldn’t make out who it was that was speaking to me. I later found out it was my daughter Kyrstie who was keeping a close eye on me right before I drifted out of consciousness. After that I don’t really remember much at all. As soon as I collapsed my daughter’s quick-thinking fiancé called for an ambulance. When the paramedics arrived my daughter left with me for the hospital while Steve followed frantically in the car. Once he found Krystie pacing up and down in the hospital waiting room she broke the news to him that that I’d suffered a stroke in the ambulance. When they were eventually allowed to come in and see me I was hooked up to a support machine.

“I’m sorry to tell you that Maria’s case is very severe,” the consultant said to Steve. At that stage they couldn’t give anymore information until the results of my brain scan came in. Whether I could be treated or not depended on what they revealed. “Please be prepared that there is a high probability that nothing more than can be done for your wife,” the consultant advised, leaving Steve with the heart-breaking task of telling the children that I might not make it through the night. The doctors discovered that I had an underlining medical condition that caused the stroke and a bleed on the brain. The results from my brain scan were largely positive and I was given the go-ahead to be airlifted to Kings College Hospital in London to undergo brain surgery.

At that stage my chances of pulling through were 50/50 and the doctors said that even if I did make it through it was likely I’d be severely disabled. The next day was Kameron’s birthday and when Steve asked him what he wanted he simply replied, “Just to have Mum back at home with us.” But for the next ten days I lay on a life support machine in intensive care. After four days the doctors weaned me off sedatives and took me out of an induced coma. The days passed by but I didn’t wake up and most worryingly, I wasn’t showing any signs of life.

Steve and the children desperately tried everything they could to coax me out of the coma from telling me what they’d been up to that day, recounting old memories and even playing the theme tune to my favourite soap Emmerdale. Steve in particular had been wracking his brains to think of something that might bring me back. One evening he was lying in bed at night thinking of new things they could try when suddenly it him and he sat bolt up right with excitement. He came up with the idea to play our wedding song – Unchained Melody by the Righteous Brothers. People might think it’s a bit cheesy but both Steve and I had fallen in love with the song all those years ago and 21 years later the lyrics still meant the world to us. ‘I’ll be coming home, wait for me,” the words seemed to speak to Steve and tell him that this was his best shot at waking me. 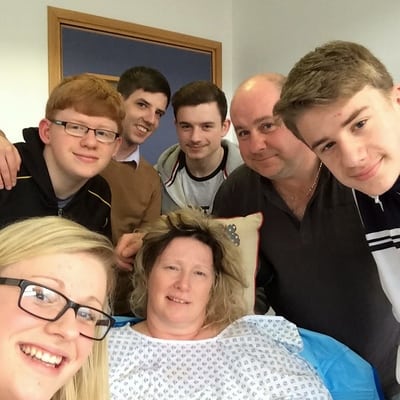 Whenever I hear the song played it always takes me back to our wedding reception where I danced in Steve’s arms all night. “I really think this song could do the trick,” Steve told the children as they helped him download the music onto his mobile phone. The next morning when Steve returned to my bedside he took his phone out from his pocket and pressed play on the keypad. As the opening chords of Unchained Melody filled the room to Steve’s astonishment my face began to twitch in response.

He couldn’t believe what he was seeing and the tears poured down his face as he realised the effect the music was having on me. “Can you hear this Maria?” he said in my ear with his head resting on the pillow beside mine. I slowly nodded. Fighting the urge to run and tell the children what was happening Steve stayed by my side to see if I’d move again. “Do you know where this music is from Maria?” he whispered and I nodded my head again. Over the next few days I started to respond more and more until seven days later I finally opened my eyes.

Two weeks after the operation I could finally communicate with my family again. It’s still quite hard for me to piece together what I went through. The stroke caused damage to my short term memory so some things are still rather hazy. My mobility has been effected too so that I now rely on a wheelchair to get around but it’s getting easier and my family have been so supportive. More than anything I’m just relieved that I’m back at home with Steve and the children. I’m so grateful to him for what he did, he saved my life. It seems that the love of my husband really was the best medicine.

Steve said “I was just desperate to get a response from her. We’d tried for days with no luck so I thought if anything was going to work it would be that song.

“Until then I lay in bed every night wracking my brains for something that would do the trick. That’s when I remembered our wedding song.

“I sat by her bedside with my head rested on to hers and the tears rolled down my face. I knew it was our best chance and I was willing it to work.

“When she responded I was absolutley delighted. “She’s such a caring and loving Mum it broke my heart to see her so helpless.

“Every day she was in the coma I had to stay strong for the kids. Telling them to say goodbye to their Mother when the doctors thought she might not make it is without doubt the hardest thing I’ve ever had to do.

“Luckily she’s come on leaps and bounds since she left hospital and we’re all so proud of her. Maria is a very caring woman and always puts everybody else first so she’s had to learn to let us support her for a change.”

If you’ve got an amazing, heartwarming or heartbreaking story to share, complete the form on the right hand side of this page to tell us a little about it.  We’d love to help you tell your story, and find out who would be willing to pay the most for your story.