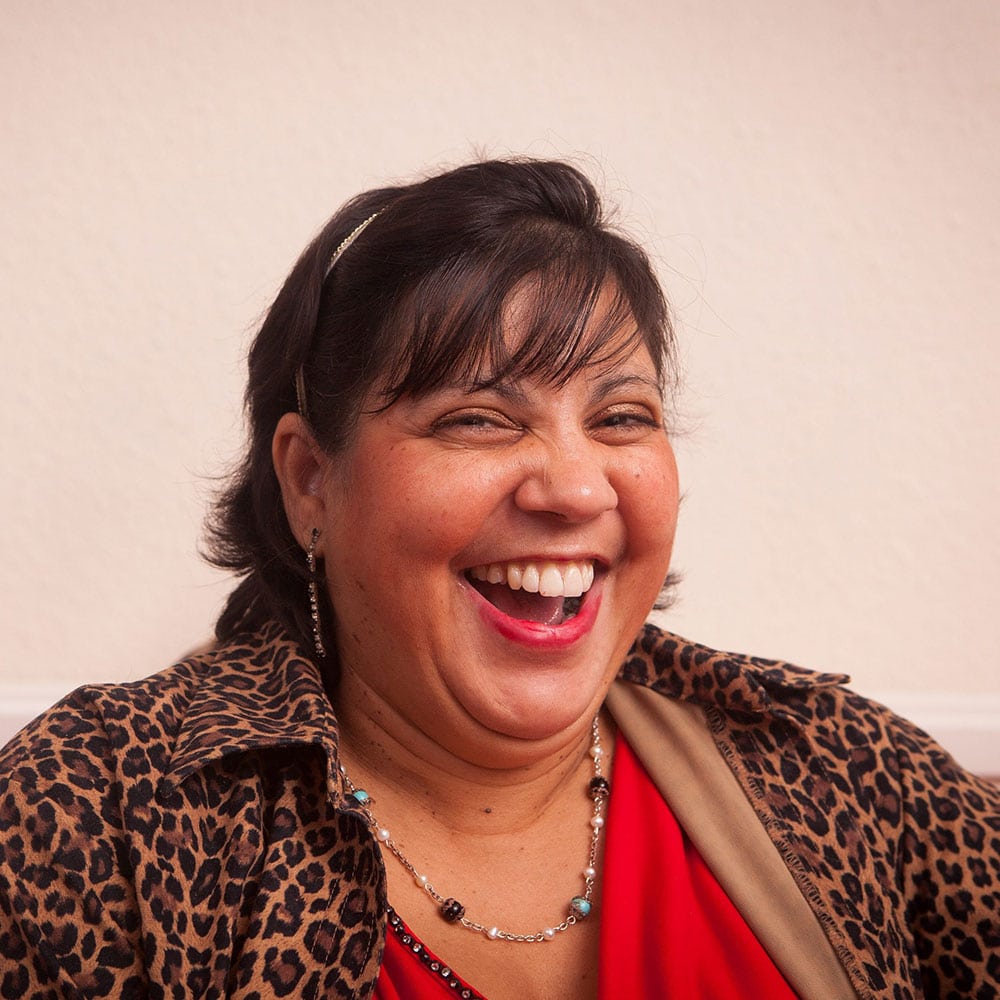 SILENCED FOREVER AFTER I WAS CONNED BY MY CARER
TANIA, 44, HAS BEEN ROBBED OF THE CHANCE TO SPEAK AFTER HER TRUSTED CARER AND FRIEND, KATHERINE, 31, STOLE THE £37,000 SHE HAD SAVED FOR LIFE-CHANGING TREATMENT.
CEREBRAL PALSY SUFFERER TANIA WAS HOPING TO TALK FOR THE FIRST TIME IN 37 YEARS AFTER SAVING ENOUGH CASH FOR THE GROUND-BREAKING IN AMERICA. BUT CALLOUS KATHERINE WAS SECRETLY DRAINING HER BANK ACCOUNT AND SPLASHING THE CASH ON LUXURIES – INCLUDING A THREE-WEEK HOLIDAY TO THE US.
KATHERINE WAS CAUGHT OUT WHEN TANIA WENT TO CHECK HER ACCOUNT AND FOUND IT HAD BEEN EMPTIED. SHE WAS JAILED FOR TWO YEARS AFTER BEING CONVICTED OF THEFT. HEARTBROKEN TANIA HAS LOST MORE THAN JUST HER MONEY, SHE FEELS LIKE SHE’S BEEN BETRAYED BY A PAL.

Tania Crowie whose friend stole her fund for surgery to give her back her voice.

Flicking through the shopping channels, a sparkly, silver necklace caught my eye. I loved nothing more than settling down to watch QVC and find a good bargain. ‘Oooo that’s lovely,’ I thought, deciding I would treat myself and order the jewellery. But before I got the chance I heard the front door opening.
‘It’s only me!’ I heard my carer, Katherine Gregory, 31, call out. She always let herself in, treating my home as if it was her own. ‘I’ll stick the kettle on, shall I?’ Katherine asked, strolling past me. I nodded and smiled as she headed for the kitchen.
Katherine had been sent by an agency to help me around the house, but she quickly became more of a friend than a carer. At the age of seven I had been left unable to speak when an operation went wrong and caused my tongue to become paralysed. With no voice I found tasks like making phone calls impossible. That coupled with cerebral palsy, meant I often could do with assistance.
Rifling through my post, Katherine tore open bills and helped to organise my paperwork. She always sat patiently with me as I scrawled down handwritten notes to communicate. I always had some questions written so when she arrived we could sit and discuss what I needed to get done.
‘Thanks for the cuppa,’ I scribbled, as we put our feet up for a few minutes. I looked forward to her popping over three times a week to help me with my chores and have a good old catch up. There was no denying it, she was a godsend.
In 1992, when I was just 23, I moved from my native St Helena, to Yate in South Gloucestershire, in the hope of finding medical treatment to help me speak again. I was given hope after watching the documentary ‘Extraordinary People’ where a woman underwent treatment to help her speak again after having paralysis of the tongue. I set about scrimping and saving the £100,000 I would need to travel to America for the life-changing surgery.
Each week I received benefits so I would put away some of the allowance, as well as inheritance money I received from my dad. He passed away in 2010 and left me the money as I was his only child that wasn’t married. He hoped it would secure my financial future. Through that and carefully managing my budget, I eventually had had £37,000 in the bank. I was still a long way off my target, but it was a good start.
With no relatives living nearby and my disability causing difficulty in making new friends, I was over-the-moon when I was introduced to Katherine in 2008. I enjoyed her company and looked forward to her stopping by. So when she stopped dropping in, after moving an hour away, to Weston-Super-Mare, Somerset, I was gutted. I bought her a leaving pressie to show her how much her time had meant to me. I was sent other carers, but none quite lived up to Katherine.
Then one day, in autumn 2010, out of the blue I got a text from her. She explained that she had set up her own agency and wondered if I wanted to be her client again. After having problems with the company I was using I thought to myself: ‘This couldn’t have come at a better time’. And when Katherine came out to see me I knew I had made the right choice. ‘I’m so glad you got in touch,’ I wrote down for Katherine to read. ‘I’m happy I did too,’ she said, smiling. She quickly slotted back into her role as my carer and took on even more responsibilities than the last time.
‘You should set up internet banking,’ she insisted. Having told me about it before, I remembered the advantages of it that she had mentioned and trusted her opinion.  After explaining how it all worked again, I had to admit it did sound easier than struggling to the bank and it meant we wouldn’t have to sift through mountains of paperwork which arrived in the post. Taking her advice, I agreed to give it a go.
Katherine and her husband set up four accounts in my name. But little did I know within days my callous carer began to transfer large sums into her own account. She was secretly draining my savings and splashing out on three holidays – one in Mexico and two in the US. Over the next 12 months, cruel Katherine siphoned around £35,500 from me without my knowledge or consent.
Katherine was sacked in 2011 for unrelated matters, but even after leaving the job still took another £2,000. I was heartbroken when I found out she had jetted to America twice on my hard-earned cash – that money was meant for me to go there for speech therapy. I had only discovered what was going on by chance when I went to visit my bank manager to ask what the total in my account was – only to discover it had been emptied.
My heart just sunk to the ground, tears streamed down my cheeks. I knew who it was straight away. There was no doubt in my mind. I complained to police but Katherine tried to claim it was ‘a gift’ – the cheek of it. It wasn’t for 14 months that I clocked she had taken a total of £37,500. She had squandered away my money to live a life of luxury and she was robbed me of the chance to speak.
Katherine would tell me I was going loopy, saying I had lost things I had just bought when really she had pinched them. I didn’t just see Katherine as professional help but I trusted her as a friend. I never thought for one minute that she would betray me like she did.

At Bristol Crown Court, in November this year, Katherine was sentenced to two years behind bars. But no amount of time can make up for my dream of ever speaking again now being in tatters. The money I saved could have given me a life. I want to work, I don’t want to sponge off the government.
A hearing to establish and confiscate Katherine’s proceeds of crime is set for March. I know I’m unlikely to ever see the money again and because of what has happened I will find it hard to ever trust anyone again. I feel so betrayed.
——–
This is a truly horrible, callous and personal crime.  If you would like to raise awareness about something similar, or expose someone’s despicable crimes, please let us know by filling out the ‘Sell My Story’ form on the right hand side of this page.  You can read more about how to sell a story here SELL MY STORY.