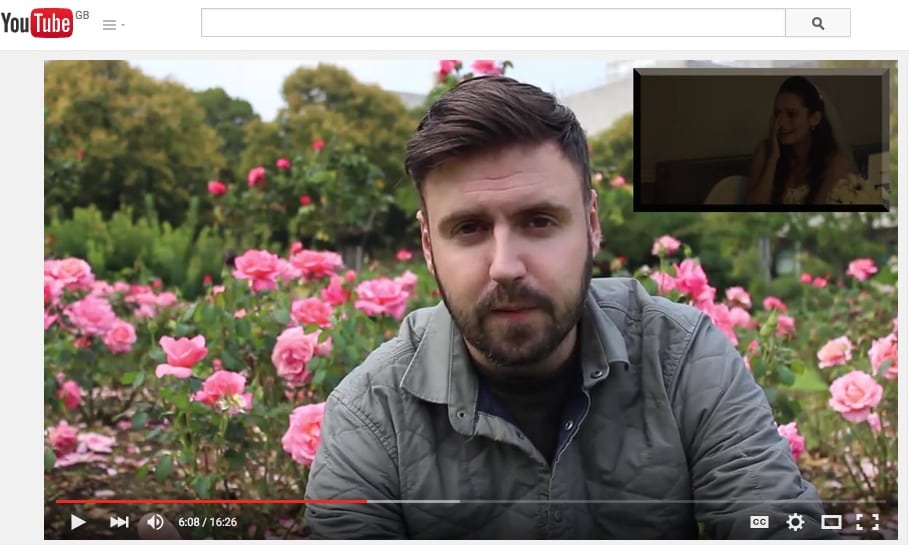 Ultimate celebrity wedding crashers give bride the perfect send off…

Groom Jamie McKee managed to get the likes of Peter Capaldi, Neighbours stalwart Alan Fletcher, who plays Dr Karl Kennedy, and a host of stars to wish his new wife well on her big day.  Can you spot the celebrity wedding crashers on bride Nicole’s wedding video?

OK, so this is one of our stories from last year, but we’ve just realised that we didn’t share it with you on SellUsYourStory.com  – we hope you love the video as much as we did!  If you have an uplifting, crazy or unusual wedding, stag or hen story (or a story about celebrity wedding crashers!) we’d love to hear from you.  We are the largest independent press agency in the UK and pay the maximum amount for your stories.  Simply contact us using the story valuation form on this page.
If you would like to read more about how to sell a story to the press, see our Sell My Story page: https://www.sellusyourstory.com/sell-my-story/

Bride Nicole Crees got a stellar wedding surprise when Doctor Who star Peter Capaldi and a host of celebrity well-wishers recorded a personalised message for her. Jamie wanted to treat his new wife to a surprise video and managed to get a whole a host of stars to wish her well on her big day.

Jamie, 32, who met Nicole when they starred in a student film together and married in September, said he took months to organise the video but was really pleased with the results. He said: ‘Nicole and I met on set of a short film. I was a serial killer and she was my accomplice. ‘We both love watching box sets and I just thought it would be great to get some of her favourite actors and actresses to record her a special message. ‘It wasn’t easy and I think Nicole thought I was spending a bit too much time on my phone but I’m really pleased with the results and she laughed and cried, which is something I hoped she would do.

‘I managed to get hold of some people via Facebook or Twitter, but Nicole and I have both worked as extras on Doctor Who so I asked one of the crew if he could ask Peter Capaldi for me and he emailed me the video a couple of days later.’ In the message, which also includes their friends and loved ones, Doctor Who star Capaldi says: ‘Hi Nicole, many, many happy congratulations on your wedding to Jamie. ‘I don’t know whether I am early, late or on time, I don’t know whether I am coming or going because I play a Time Lord as you know and all that really matters is that you two are going to have a wonderful time together and you’re going to spend the rest of your lives together. ‘So, have a wonderful happy life, all the best from Doctor Who.’ 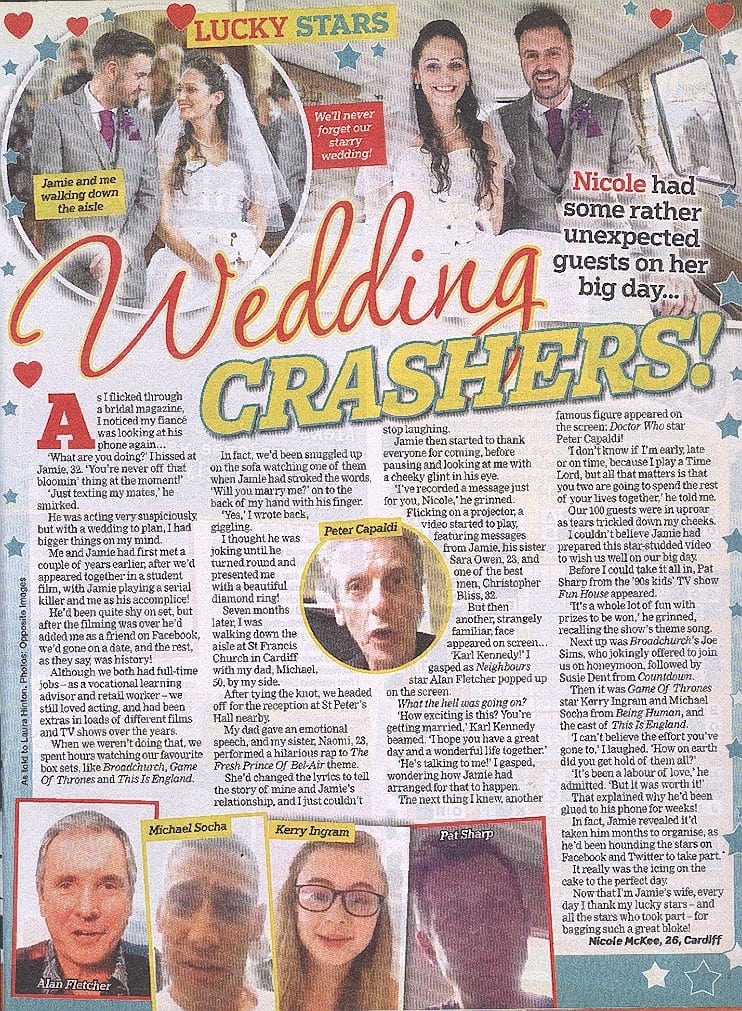 And Alan Fletcher, otherwise known as Dr Karl Kennedy from Neighbours says: ‘How exciting is this? You are getting married. And not only that you are marrying a great guy in Jamie and not only that you are getting married in one of my favourite places in the world, Cardiff. ‘I hope you and Jamie have a great wedding day today and a wonderful, wonderful life together. You deserve it.’ Pat Sharp from the Funhouse also makes an appearance, telling Nicole to have a great day and ‘to remember, it’s a whole lot of fun with prizes to be won’ while Broadchurch star Joe Sims even offered to join the pair on their honeymoon.

There were also messages from This is England stars Thomas Turgoose, Jo Hartley and Vicky McClure, with Welsh boyfriend Jonathan Owen as well as Kerry Ingram from Game of Thrones, High Hopes star Boyd Clack and Being Human star Michael Socha, who recorded a message from a film set in Vancouver.

One of Jamie’s former acting colleagues Ewen McIntosh, who played Big Keith in The Office, also congratulates 25-year-old Nicole, who works in the cash office at Tesco, and pays homage to budding actor Jamie, who is a vocational learning advisor.

He said: ‘I did a speech first and then I played the video and Nicole was really surprised. It was directed by Mike Murphy and Kai Evans was on camera capturing Nicole’s reactions, which we added to the video later. ‘It was a lot of hard work but really worth it. We watch lots of box sets when we’re at home and it was great to include some of her favourite actors in the video.

‘I got in touch with Alan Fletcher via his website and others were either through people I know or via social networking sites. I think Nicole was tempted to throw away my phone at one point but at least she knows what I was doing now.’

Nicole, who honeymooned with Jamie in Mexico, said: ‘It was my perfect fairytale wedding. I couldn’t believe it when I saw the video.

‘Jamie and I had watched all the programmes together so for him to get people like Michael Socha from Being Human and the guys from This Is England was fantastic. ‘I’m a huge fan of Susie Dent from Countdown and he’s managed to get a message from her too. ‘He seemed to be spending loads of time on his phone and I wanted to just throw it away but now I know what he was up to. I’m still overwhelmed.’

We helped Nicole and Jamie get national press coverage for their story, including an exclusive deal with Real People and several spots in the national newspapers:

If you would like to sell a wedding related story to the national press, or any other real-life story, we are waiting to hear from you.  We guarantee the maximum payments possible, and ensure that you stay in control of your story.