An amazing weight loss story: After being told she was TOO FAT for life insurance, 21st Lucy Rintoul knew something had to be done about her health – disgusted by how big she had let herself become she lost over 12 stone, slimming to a slinky size 10! 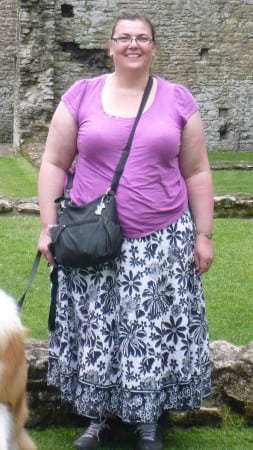 The civil servant, now 43, had applied for life insurance as part of a condition of her mortgage but was shocked and offended when five companies each turned down her application. She was in denial about how big she had become and so the comments from the insurers gave Lucy the push she needed to begin loosing weight.

Lucy says: “I was absolutely devastated about being told I was too fat to insure. It was completely humiliating because I hadn’t realised how bad things had become.”

“I felt very hurt and angry and convinced myself that I was being discriminated against at first but this just my denial getting the better of me. The comments made me take a long hard look in the mirror and I knew I had to do something about my size. I couldn’t bare the thought of leaving my husband with nothing should something happen to me, so I decided to join Slimming World. Pretty soon the hurtful comments were converted into the most positive decision I have ever made.” 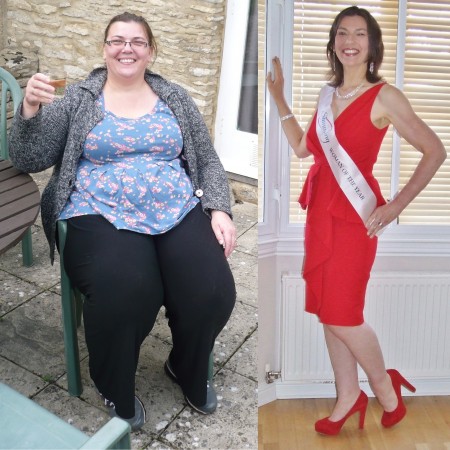 After a series of personal tragedies struck whilst living unhappily in London, Lucy, who now lives in Alexandria, West Dunbartonshire, began piling on the pounds. Binging on a diet of comfort food, such as chocolate, crisps and takeaways, Lucy ballooned to a size 26.

Tipping the scales at 21st 6lbs, the Civil Servant decided that it was time for a change and began looking to move out of the capital. She says: “Although I was born in London, I spent my formative years in Somerset and moved to Surrey in 1989. I became unhappy when I moved to Croydon in 2006 and my beloved pet dog Billy Bunter passed away. I was living on my own and his loss turned my world utterly upside down.”

Soon after Lucy suffered another devastating loss – her friend, who she had known for 10 years, passed away from cancer. She says: “Whilst I was relieved that her suffering was over, I missed her enormously. “I started comfort eating and drinking in order to compensate. I was eating high calorie foods, cakes, chocolate – anything that would provide some escapism for a few moments from the emptiness and loneliness I felt without her. Consequently I gained more and more weight. I had no idea how large I was becoming because I just couldn’t see it, or maybe I just didn’t want to see it!” 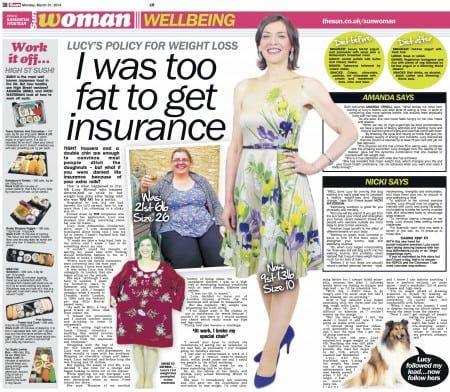 Struggling with the loss of her two closest companions, Lucy became depressed and was put on anti-depressants for three months to cope with her woes. But after years of struggling with the guilt of not being able to save her loved ones, she decided to move away from the place that was making her so unhappy. Whilst applying for her mortgage Lucy was asked to take out life insurance and was devastated when five different insurance companies turned her down. She says: “Because of my medical history of being obese, the companies claimed I was at a high risk of developing medical conditions such a heart disease, diabetes and asthma. Although I wasn’t suffering from these conditions at the time; I was too high risk for them. I was too fat to insure!”

“I decided to move out of London anyway without the life insurance and settled in Alexandria, which is such a beautiful place. I felt very relieved to have moved away from Croydon. It was a concrete jungle, with high crime rates, and I turned to food to compensate for my unhappiness. The pace of life in Alexandria is much slower and I felt happier out of the rat race. It gave me the space to think and feel safe.”

It was when Lucy began to feel more at ease with life that she tried for the second time to apply for life insurance and was yet again told to lose weight. My weight was preventing me from living,” she says. “I no longer went to the cinema or out to restaurants for meals because I couldn’t fit into seats or I would squeeze into chairs which made my hips and legs ache. Flying had also become a challenge. I would also have to endure the humiliation of asking for an extension to my seat belt, so eventually I stopped going on holidays abroad.”

‘I was also so embarrassed at work as I had to get a special made to measure chair, which broke under me and I could see people in the office smirking. It was the final straw for me. I knew something had to be done.” So, at the advice of her family and friends, Lucy joined Christine Warren’s Slimming World group in Alexandria on 14th July 2012.

She says: “I immediately felt welcome at the group and this gave me the confidence and motivation to lose weight. I’d tried slimming before but I always failed miserably because the diets I followed would leave me feeling hungry and deprived – and so I’d be miserable too. I’d miss my favourite foods too much, so before long I’d have thrown in the towel and be back where I started. Slimming World was completely different to anything I’d known before. I didn’t have to go hungry and I’ve never once felt like I was missing out on anything.”

After a few sessions Lucy began exercising with her three-year-old pet dog, Lochi. She says: “At first I found it very difficult to exercise as I couldn’t muster up the energy. But the more weight I lost, the easier I found it and now I love going on walks with Lochi. He’s even lost a couple of pounds himself – though he wasn’t really fat in the first place.”

“I started doing exercise videos with dumbbells in my front room and I love the buzz that I get out of doing exercise. Within just one year Lucy reached her target weight of 10st 6lbs. She says: “When I walked into the group I didn’t know anyone. I was nervous that I would be humiliated by having my weight shouted out in front of everyone. But I have had such tremendous support – no judgement and no humiliation.

“There were weeks when I had gains but there is a real sense of camaraderie from the group and no one looked down on you. I couldn’t have wished for a more friendly bunch of people to lose weight with.”

Realising she was still able to healthily lose another few pounds, she reset her target to 9st 13lbs, which she reached in September this year. She says: “Losing the weight has been one of my greatest achievements and I was beside myself when I finally reached my target. When I was overweight I was very shy; always trying to blend into the crowd, public speaking was the stuff of nightmares!”

“Now I feel so much more confident and I know that if I am determined enough I can achieve anything. I have a positive outlook and an inner peace that I had never expected to find in a million years. Slimming world has given me so much more than a diet, it’s a healthy eating plan. I can still have all my favourite things such as Curly Wurlys, cake, curries and even chips; but I counteract these little ‘sins’ with nutritious food that is prepared in a healthy way.”

“Now I have a wardrobe full of pretty little dresses and a whole load of heels, which I absolutely love to wear. I’m no longer afraid of drawing attention to myself by doing my make-up and hair – something I’d never have felt comfortable with before. When I was at my largest I used to despise having my photo taken and would shy away from the camera at every opportunity. Now I can’t get enough of people taking my picture. I am so proud of my new figure and how much I have achieved. My weight loss really has been a total life changing experience for me and I refuse to return to my previous unhappy self.”

The SellUsYourStory team say a huge WELL DONE to Lucy!

If you also have an amazing weight loss story that you’d like to share with a magazine, please complete the Sell a Story form on the right hand side of this page and tell us a little bit about it.

To read more about how to sell a weight loss story see our Sell My Weight Loss Story page: www.sellusyourstory.com/sell-my-weight-loss-story/