Mother Asha Lal tells her heartbreaking story of watching her daughter fight for her life following a shocking allergic reaction to penicillin.

I watched as my five-year-old daughter Lydia played with the other children at our local park. It was a beautiful day during the half term holiday in May and it was lovely seeing her enjoy herself.

‘It’s time to go Lydia,’ I called out. ‘But mummy can we stay a little longer?’ she begged. ‘Five more minutes then we need to get home for tea,’ I said smiling.

When we got home that evening I brushed her forehead and noticed she was a bit warm. ‘Amit, can you grab the Calpol?’ I asked my husband. ‘Sure, what’s the matter?’ he replied. ‘Lydia has a temperature so we’ll need to keep an eye on her tonight,’ I answered. But by the next morning Lydia was burning up. It was a Saturday so the only contact I had was for the out-of-hours GP service.

I was told to take Lydia to the Pheonix Health Centre, a walk-in clinic near our home in Wolverhampton. Lydia and I sat in the waiting room for hours hoping to be seen. When we were finally called back I explained Lydia’s temperature to the doctor. ‘I’m going to prescribe her penicillin and ibuprofen to be taken four times a day,’ she advised.

‘Ok, but Lydia has never had penicillin and I’m allergic to the medication,’ I explained. ‘Is there anything else we can give her?’ ‘Just because you are allergic doesn’t mean she will be,’ the doctor scolded. ‘She will be fine.’ I picked up the prescription on my way home and gave Lydia her first dose that afternoon.

She went straight to sleep on the sofa and stayed drowsy all day. By 8pm I tried waking her to see if she would eat. ‘Why don’t you have a bite of toast or some soup?’ I coaxed. ‘No mummy I don’t want to eat,’ she said. ‘Alright princess but you need your medicine,’ I said. ‘No mummy, I don’t want it,’ she cried. ‘It’s yucky and makes me feel bad.’ ‘Don’t be silly,’ I said, as I fought to get her to take her second dose of the drug. I was so worried about her I put Lydia to bed with me and Amit so we could check on her through the night. 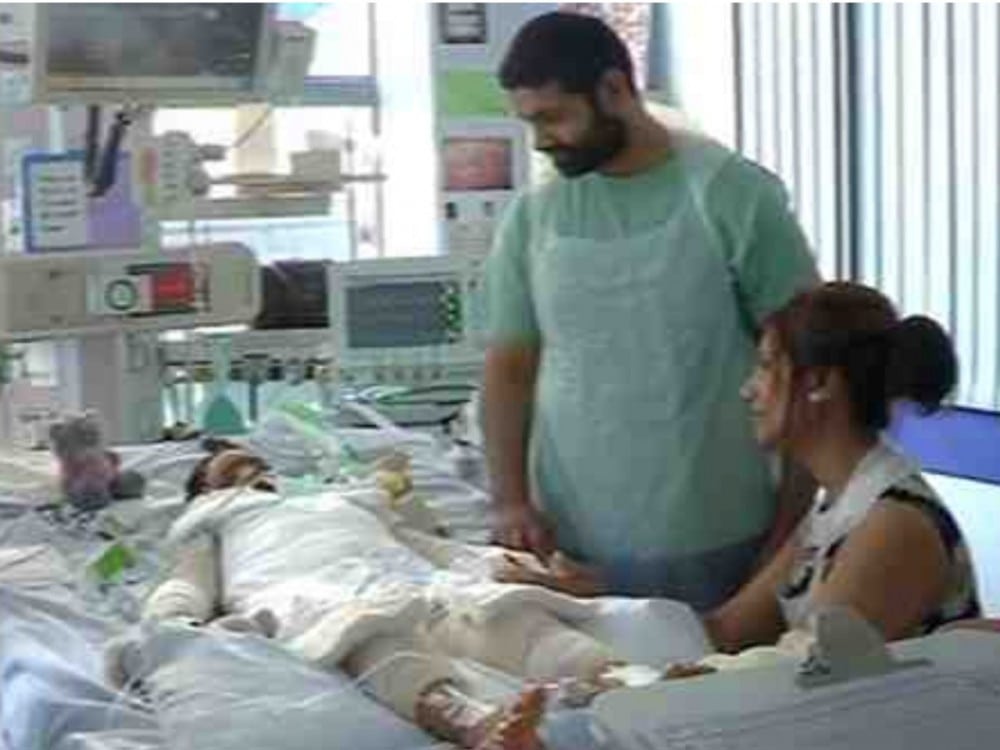 I kept a wet flannel on her head, but she seemed to be getting hotter and hotter. At midnight I noticed Lydia’s ears had turned bright red. ‘Amit come see this,’ I called. ‘What’s the matter?’ he asked. ‘Look at Lydia’s ears,’ I said. ‘They’re red and the skin looks like it’s bubbling up. Feel them. She’s scorching hot.’

‘Let’s get some flannels and keep them on her ears,’ he suggested. By the morning a rash had broken out all over her chest and there was white, gooey puss coming from her ears. We rushed her to Russells Hall Hospital in the West Midlands. I sat in A&E with Lydia while Amit stayed with our 8-year-old son Nathaniel outside and let our five older sons know what was happening. ‘Mummy, I don’t feel good,’ Lydia whined. ‘My head, my ears and my tummy hurt.’ ‘It’s ok sweetie, the doctor is going to make you better,’ I soothed.

When we were finally seen doctors started rushing around her. Her temperature was 39.5 degrees and the rash had spread to her stomach. Lydia started crying and no one would tell me what was wrong. ‘Is my daughter ok?’ I cried. ‘Why won’t anyone tell me anything?’ Eventually a doctor came to me and explained they thought she may have something more serious and they were admitting us to the children’s ward. But by 11pm another doctor told us we were being discharged and that she only had a high temperature. We went home and things went from bad to worse.

Lydia’s skin started bubbling and blistering down her neck and back. She was burning up and shaking. ‘That’s it!’ I cried to Amit. ‘We’re going back to hospital! This isn’t normal. I’m sure it’s the penicillin.’ We carried Lydia into A&E as her skin was falling off.

Doctors were rushing around and eventually we were told we would be transferred to the University Hospital of North Staffordshire in Stoke-on-Trent. For three days I watched as Lydia got worse and doctors scrambled to figure out what was wrong. Eventually a biopsy revealed she was having a rare toxic reaction to the penicillin.

The doctor said, ‘Mr and Mrs Lal, Lydia is suffering from Toxic Epidermal Necrolysis Syndrome [TENS]. ‘It is an extremely rare condition that only affects one in a million people in the world. ‘It causes the top layers of skin to detach from the lower layers all over the body, and can lead to multiple-organ failure.’ 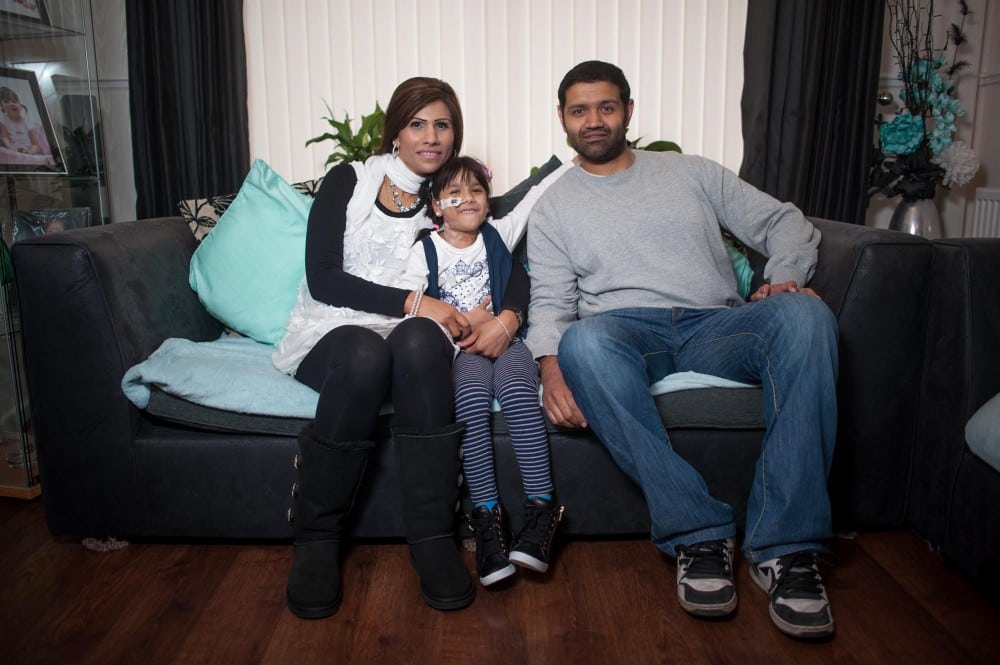 ‘Oh no!’ I cried. ‘My baby! Her body is burning from the inside out! Is she going to die?’ ‘It can be fatal but she’s a fighter,’ the doctor said. ‘We can’t do any more for her here so we’re going to put her into a coma and transport her to Birmingham Children’s Hospital for specialist treatment.’

‘Will she wake up?’ I asked. ‘There’s no guarantee,’ he said. I burst into tears but there was nothing I could do.

Lydia was admitted to the children’s hospital at the end of May and immediately I felt better. The staff got to work bandaging her wounds and stabilising her. She was isolated in her own room. Doctors constantly explained what was happening and Lydia was taken to theatre to redress her wounds every other day.

Amit and I stayed by her side 24 hours a day and for the next few weeks all we could do was wait and pray. I would sing to Lydia. She loved music and was always singing around the house. Despite the situation deep down I had faith that she would open her eyes again.

About four weeks later Lydia’s eyes fluttered open. But it only lasted a few seconds before they were shut again. ‘She’s going to wake up,’ I told Amit. ‘I’m sure of it.’ ‘I know Asha,’ he said. The next week Lydia opened her eyes properly.

It was quiet in the ICU and I was sat next to her bed holding her hand while Amit sat in the corner. Tears were running down my face as I said: ‘Lydia it’s mummy. I love you so much. ‘You’ve been asleep for a little while but everything is ok. ‘Mummy and daddy are here.’

She couldn’t move but I knew Lydia was coming back to me. A few days later she started to speak and by the end of the week she was in physiotherapy. At the end of July Lydia was finally well enough to come home. She had been in hospital for nearly three months.

Because her organs had been burned so bad from the TENS, she still needs a feeding tube to eat. But Since returning home she has gone from strength to strength. She returned to school and runs and plays, even though she tires quickly.

Doctors say it will be a couple more years before she has fully recovered and she’ll need skin grafts to fix the scarring that has devastated her body. But my little fighter pulled through and beat all the odds. It’s hard not to blame myself. As a mum I felt like I should have questioned more. But I never thought in a million years that penicillin would nearly kill my baby girl.

If you have a health story that you would like to share with the press to raise awareness, or raise money for yourself or a chosen charity – get in touch today.  You can reach us by completing the form on the right hand side of this page, or by calling the story hotline number.

We guarantee to get you the most money for selling your story to magazines or newspapers. You can rest assured that your story will always be told sensitively. To read more of our recent health stories, visit our Recent Health Stories section: https://www.sellusyourstory.com/news/category/health-stories/