SellUsYourStory.com were contacted by Dean and Julie, who thought that her marriage was special enough to tell the nation. She was right, her story ‘Brother and Sister get Married’ was published in the Sunday People newspaper, and will be published in a women’s weekly in the coming months.  SellUsYourStory.com is part of the largest press agency in the UK and we specialise in helping people share their stories and get the most money possible for their story.

Have you got an amazing proposal, great marriage, or a different story you think would make a good magazine article? Get in touch!

Brother and Sister get Married: A couple claim they “don’t care what anyone says” after announcing they are getting married – despite being step-brother and sister.

Julie Lloyd, 52, and Dean Hunter, 47, are tying the knot even though her biological father Robert Kirkwood, 75, is her fiance’s stepdad.

For more than a decade the pair saw themselves as brother and sister, but their feelings changed when Dean turned to Julie for support through his divorce.

But despite their extended family objecting to the romance Julie insisted: “We are going to get married and it doesn’t matter what anyone else says.”

And perhaps surprisingly, the pair’s ‘dad’ Robert is 100 per cent behind their upcoming nuptials – as long as Dean keeps calling him ‘dad’.

He added: “I’m happy they are getting married – end of story.

“I’ve been his step-dad since he was a toddler so I couldn’t get used to it if he didn’t call me dad.” 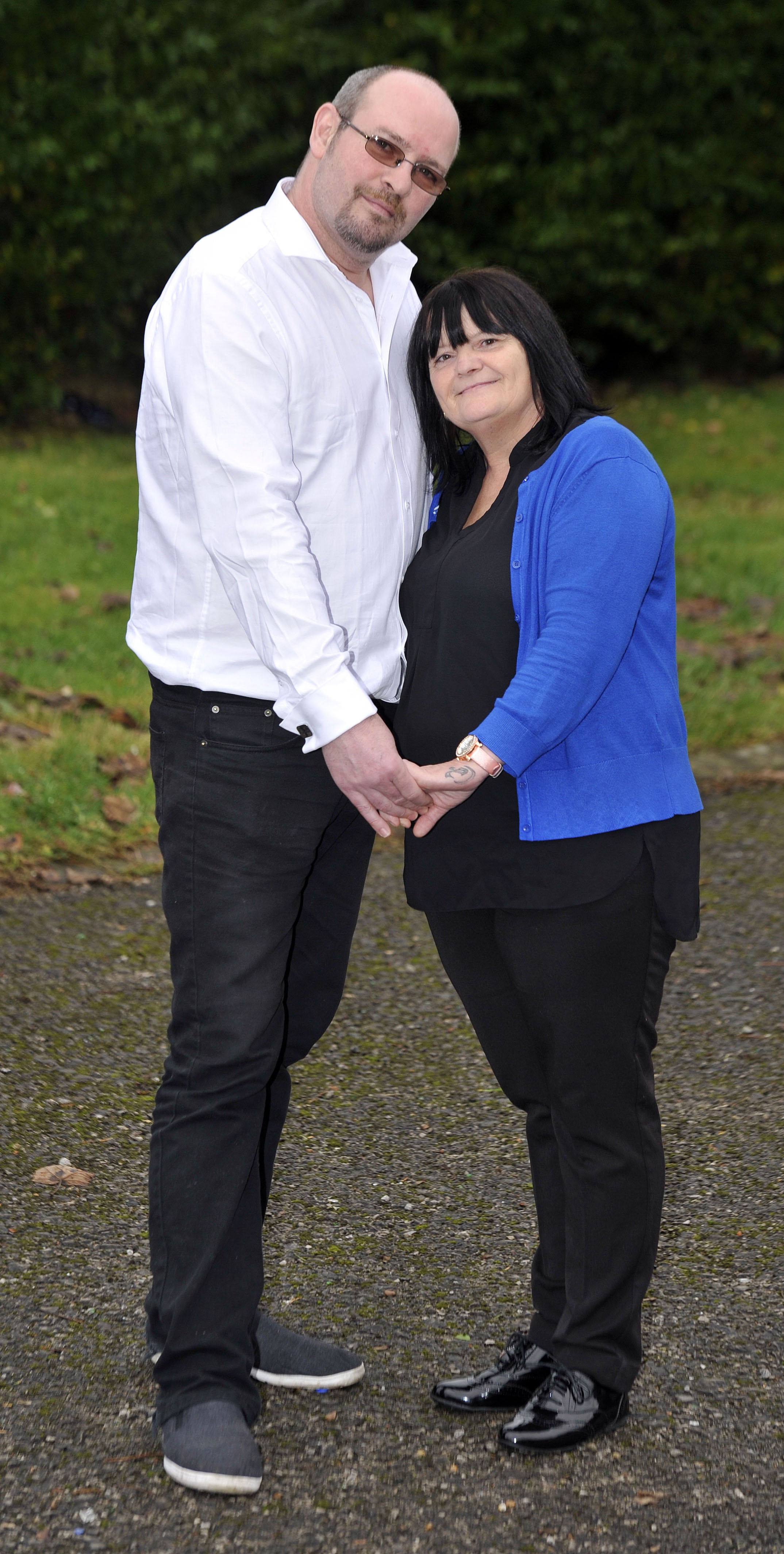 Mum-of-two Julie‘s biological father Robert brought up Dean as his own and the pair both call him ‘dad’.

They fell for each other five years ago when Dean moved in with Robert after the breakdown of his marriage and found comfort in the arms of his step-sister.

They only came clean four weeks ago but insist they are “doing nothing wrong” and all of their family has been informed.

They plan to get married in an intimate ceremony next month despite suspecting many of their extended relatives are likely to object when they see them in the future.

Electrician Dean said: “It did feel strange at first and it took me a while to get used to it.

“I’m not going to let anybody dictate my life – it’s about me and her.

“I have not seen some members of the family directly but I know some of them will be against it when I do speak to them.

“If I was to bump into them they will probably just pass me in the street now without speaking to me.

“We know we are going to be up against it but we are just going to see how it plays out and if we need to we will move away.

“I don’t want to run away and move but we don’t know what the backlash will be.

“It’s sad I have to think like this because it should be the happiest day of my life.”

Pharmacist Julie added: “We had to overcome people not been happy with us being together.

“We are going to get married and it doesn’t matter what anyone else says.”

Julie‘s mum Mavis got together with Robert in 1962 but he said they split up before his daughter was born in 1964, and he didn’t know she existed for decades.

Dean‘s biological father John Hunter died in a car accident in 1970 when he was a baby and his mum Myra married Robert in 1975.

Robert was a cabaret semi-pro drummer and used to play in all the clubs in Whitefield, which is where he met Myra.

He brought up Dean, then aged five, as his own, and even when Robert and Myra divorced in 1987, the men remained close and called each other “father and son”.

And it is only thanks to a private investigator the pair are going to tie the knot.

Julie hired a detective to track down her dad and found him in 1996 after 20 years of searching.

Robert introduced Julie to his step-son later that year when he took her on a visit to Dean‘s home he shared with partner Wendy, who he married in 1999.

As a result of her new-found ‘brother’ Julie met Wendy’s brother and they ended up marrying the same year – meaning she became Dean‘s sister in law.

Dean and Wendy divorced in 2008 and he turned to her father Robert, moving in with him for six months in August 2011.

Robert had by then rekindled a romance with Julie‘s mum Mavis and their daughter would visit them – getting to know lodger Dean even better.

Following a booze-fuelled evening of karaoke in October 2011, Dean plucked up the courage and kissed Julie in the kitchen of her dad’s house.

The party included Mavis, Robert and Dean‘s daughters, who were in bed at the time.

Dean, from Whitefield, Greater Manchester, made his move when they both got a short moment alone in the kitchen as the night came to an end before Julie got a taxi home.

“It all went in slow motion.

“I was thinking it’s like my sister even though it’s not and there is no blood line there, but because it was my step-dad’s daughter.

“Even he said ‘you are not my son’ to reassure me, but I’ve always looked at him as a dad.

“We were close, he was a drummer and I am into my music.

“Julie and I were spending more time together and we have both been through difficult relationships and to be honest I could never really speak to my ex-partner.

“We found we could talk to each other like it should be, and we could just connect. It developed from there and just felt right.

“We have gone through similar problems and we just grew close and fell in love.”

Julie, from Prestwich, Greater Manchester, said: “He just kissed me and said he had feelings for me. I was shocked, I was on my way home in the taxi and thinking what’s just happened.

“I felt the same for him, I have done for a long time but we couldn’t do anything about it because he was living at my dad’s and it’s his step-dad.

“I went round the day after, Dean didn’t think he’d see me again, and we had a good talk and that’s when things took off.”

They didn’t go on any dates but kept their relationship quiet, with her visiting when his kids were in bed, and keeping in touch via regular phone calls.

Dad Robert said he had his “suspicions” when Julie started regularly visiting the house.

He said: “With Dean living at my house she used to come up and she started coming up regularly and I thought she’s probably coming up see Dean now so I left it at that.

“One thing led to another and you know the end result.

“It took off from there.

“I’m quite happy with it, I don’t have a problem with it whatsoever.

“There is nothing untoward about what’s happened.

“It’s all in the past and it’s no use raking over old coals. I let them get on with it.

“It’s not before time for them to do it. They’ve been seeing each other for a long while now.”

Dean said they never flaunted their relationship in public and kept it under wraps to protect his children Kelly, 23, Leah, 19 and Mille, 12.

But they officially announced they were an item last month and Dean popped the question on bonfire night at his flat in Whitefield, Manchester, this year.

They announced it to the patrons in their local pub that night when they went for a celebratory drink, and said their pals were delighted.

They have planned a low-profile ceremony at Bury Registrar office on December 16 with Dean‘s daughter Millie as a bridesmaid and only Dean‘s sister and husband attending as guests.

The pair live a mile apart and are planning to move in together once they are married.

Dean said: “We can’t wait for the day.

“We are going to do it no matter what.

“There will be a few obstacles but my daughters just want me to be happy.

“You have one life and one chance to be happy.

“The main people – my children – they’re the only ones that matter.

“Some of the extended family are hostile.”

Dean said he doesn’t speak to one brother, but his other brother Glenn, 42, and sister Gaynor, 53, are “all for it” and have been supportive.

Julie claims she faced some criticism from her mother, who for years “walked all over her” but she said: “I should have stuck up for him but I didn’t.

“I let my mother walk all over me for a lot of years but enough is enough now.”

If you want to sell a story to a magazine, you can find out more on our Sell My Story page.  If you would like to contact us, use the Story Valuation Form on this page, or find other ways to reach us on our Contact Us page.