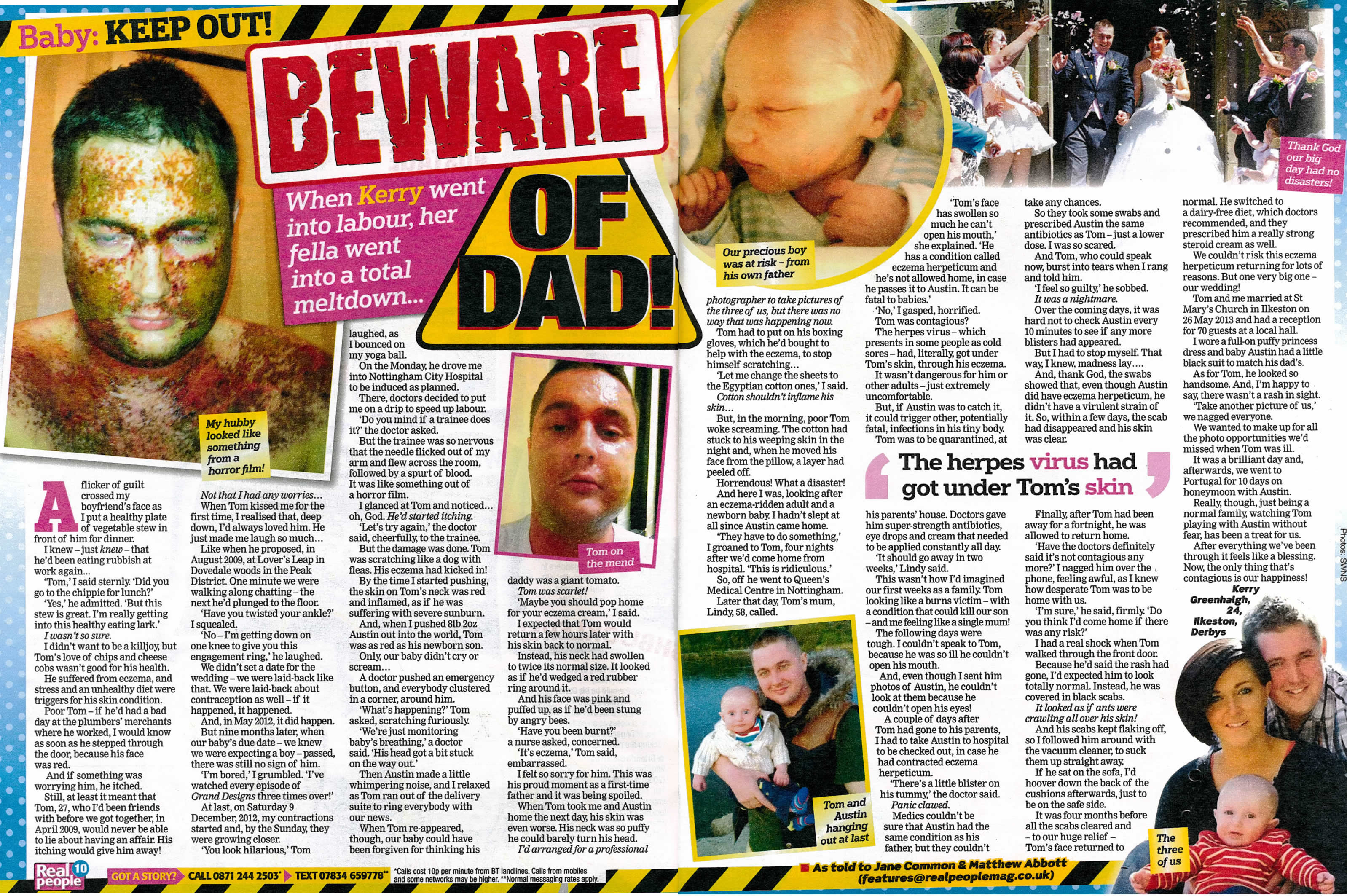 THE BIRTH OF HIS SON SHOULD HAVE BEEN THE HAPPIEST TIME OF TOM’S LIFE. BUT AFTER HIS WIFE, KERRY WENT INTO LABOUR, TOM, 27, WASN’T THINKING ABOUT HOLDING THE NEW LITTLE LIFE IN HIS ARMS.
AFTER CONTRACTING A DEADLY VIRUS THAT TURNED TOM’S HEAD AND SHOULDERS INTO A GIANT PUSS-FILLED SCAB, HE WAS MORE CONCERNED ABOUT HOLDING ON TO HIS OWN LIFE.
THE HIGHLY CONTAGIOUS DISEASE WHICH CAN CAUSE BLINDNESS, AND IN SOME CASES EVEN KILL, AND THAT BEGAN AS A MILD ECZEMA RASH, QUARANTINED TOM FOR TWO WEEKS IN WHICH HE BATTLED FOR HIS LIFE AND COULDN’T SEE HIS WIFE OR HIS NEW BABY. BUT AFTER A GRUELLING FORTNIGHT, TOM PULLED THROUGH AND WAS ABLE TO KISS HIS WIFE AND HOLD HIS SON FOR VERY THE FIRST TIME. 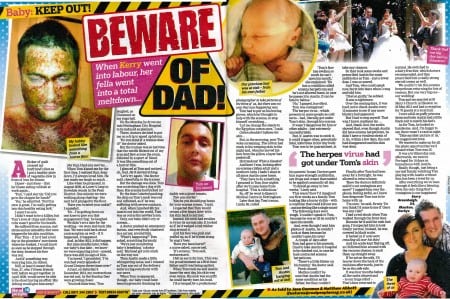 With a tumble, Tom went down like a sack of potatoes. I rushed over to him, careful not to trip on the uneven ground. “Are you OK?” I yelped. “Couldn’t be better,” he said with a grin. And at that, he turned around holding a small box in his hand. He opened it and I couldn’t believe my eyes: a beautiful, sparkling engagement ring. “Of course I will,” I squealed, before he’d even asked anything, and fell on top of him on the muddy ground.

Walking in the romantic Dovedale woods at Lover’s Leap in the Peak District, my boyfriend Tom, 27, and I had been dating for two years before he proposed.

Not long after the wedding, I decided to get my hands dirty again by doing an engineering apprenticeship. I’ve always been a petrol-head and was in the army for a few years before I met Tom. And I thought it would be good to get back to using my hands.

That is until I missed a period. “Tom, there’s two blue lines. I told you I was feeling dodgy.” With that he came in with a look of terror on his face. “I guess we’re having a baby then,” he smiled. We hugged for what seemed like a lifetime. “I hope it’s a boy,” he said. “Or a girl,” I replied hastily, although I secretly wanted a boy too.

Nine months and two weeks later and there was still no sign of the little bundle of joy we’d been waiting so patiently for. My feet were the size of a clown’s and the novelty of being pregnant had certainly worn off. I just wanted to give birth.

On December 12th 2012, I had been having contractions for a few hours and went to Nottingham City Hospital with all hopes of being induced. But they told me that I didn’t need it – the baby would be born normally. Grateful I could have a natural birth I turned to Tom, who was by now, so anxious he was scratching and itching his neck with nerves.

Tom’s always had a problem with eczema. It flares up when he gets worried and when things get on top of him, so when he saw me in the hospital bed as the nurse was trying to put a needle in my arm, he was a mess. He was gripping the sides of the chair.

“It’s all right, Tom,” I said as the nurse fumbled with the needle. “Practice makes perfect.” I laugh about it now because it should have been the other way around. I was the one in labour – Tom should have been trying to comfort me! But he was getting worse every minute. His face was getting redder and redder.

Luckily things calmed down a bit then and Tom and I were able to get some sleep. At half past four the following morning, after spending the night bouncing on balls and having a bath, baby Austin was born. Tom went out of the room to have a little cry and came back in hugging the midwife. We were just so grateful that our baby had been born with no complications. Tom popped home then to get me some fresh clothes, put some eczema cream on and get some sleep. But when he came back, his neck had swelled to at least twice its size. The redness in his face was even worse and his skin was weeping.

“Tom, what’s happened?” I said shocked to see him looking so bad. “You look like you’ve rubbed Vaseline all over your face.” “I’ve got to lie down, love,” he said. “I’m in bloody agony.”

He spent more time in the hospital bed than I did. And I was the one who’d just had a baby! Just as he was climbing in to bed, a doctor walked by asking if he’d been burned. They were very concerned. But Tom just said it was his eczema and that he’d be fine. That was just the start of it.

The next day when I came home from hospital with Austin, Tom went to the GP for a check-up as his skin was getting worse. He was given some more eczema cream. He was having hot baths as it was the only thing that could stop the pain. I put fresh cotton sheets on the bed to be cool for him, but it ended up sticking to his face and ripping his skin of him. He even put on boxing gloves so he couldn’t scratch his skin – he was bleeding everywhere. And by the end of the week, after I’d been awake for over 72 hours, breast feeding, looking after Austin and the house, I was on my last legs. I was getting tunnel vision.

Tom went to the Queen’s Medical Centre in Derbyshire, and he didn’t come back. The doctors told him that his condition, exzema herpeticum (corr), was so severe he couldn’t be anywhere near me or baby Austin for at least two weeks. It could prove fatal for babies.

They gave him antibiotics and extra strong cream for his eyes to protect him from the spreading rash, and sent him home to his mum. Because of the risk to Austin, I couldn’t see him either in case I caught it and passed it on to him. I told my sister who had come to help me, “I can’t bear to look at him, sis. It’s absolutely heartbreaking, and frightening.”

He looked as though he walked through a fire. For the next two weeks I was effectively a single mum. I couldn’t even call him to see how he was because he couldn’t even sit up in bed, let alone hold a phone to his face. He missed Austin’s first nappy change, him trying on his new baby clothes, and the times he cried and ate and slept. I sent him picture messages, but I had no idea at the time if he was receiving them.

He was in quarantine.

A few days later, when I took Austin in to be checked over by the midwife at Derby Royal Hospital, she noticed a little blister on his belly. Doctors immediately prescribed the same treatment as Tom and thankfully the rash quickly disappeared before it had chance to fully develop. It was an incredibly hard time and I don’t think I would have been able to handle it without my sister and mum, and Tom’s mum to help out.

When Tom eventually came home, he looked even worse. Although his skin had stopped weeping and he wasn’t in as much pain, he still looked like his face had been set on fire. The first thing he wanted to do was see Austin. “Where is the little guy?” he said as rushed into the house. “I’ve not seen him in weeks!”

“Did you not get the pictures I sent you?” I said confused. “What pictures?” Tom said. And just then they started to come through, one after another. Pictures of Austin in his first nappy, in his new baby grow and sitting in his new high chair. “My little man,” cried Tom looking at the pictures.

We had our family back together at last.

It took me about four months after that for my skin to finally clear up. I had to take six weeks off work from the plumber’s merchants as I waited for the scabs to go. It was a nightmare. I’ve got sensitive skin and eczema and then because of the stress of the labour, I started scratching myself. I was told it would have been easy to pick up the virus from something like a door handle if someone who’d got a cold sore had touched it. Kerry kept in touch with texts and picture messages, but I didn’t see any of them until I came home. It wasn’t the same as being there. It was such a relief when I was finally allowed to go home and see him and hold him.”

Do you have an interesting, heartbreaking or inspirational story to share?  Complete the form on this page and find out how much your story is worth today.

Read more about selling a story on our information page: sell my story.